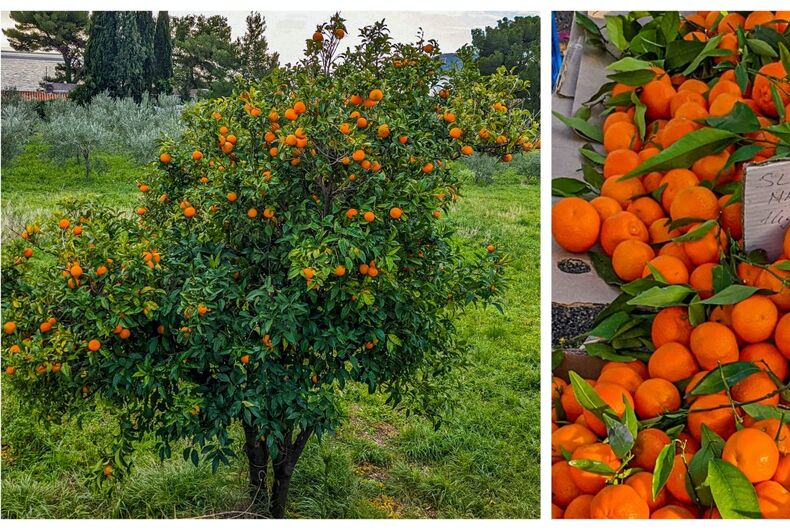 Last November, not long after arriving here in Split, Croatia, I noticed that the countryside was filled with trees laden with what looked like little oranges.

Could those be satsumas? I wondered. Even since I was a kid, I’ve always loved the little Christmas oranges, supposedly from Japan. They were so much sweeter and easier to peel than oranges.

We visited the local open-air market, and I found that — yes! — there were satsumas, and they only cost six kuna a kilogram, or about 40 cents a pound.

They were so much fresher than any satsuma I’d eaten before, usually right off the tree. One merchant even called to us, “Yes, mine are best! Picked this morning in my yard!”

A few weeks later, I noticed an orange spot on my toe, and when I looked it up online, I found an article that said it could be the result of eating too much orange food.

Which made perfect sense since I was eating a kilo of satsumas every other day!

I couldn’t help but remember how, back when we were living in Mexico, Michael and I had quickly discovered fresh avocados, which seemed like an entirely different fruit than the flavorless — and expensive! — ones we’d known back in Seattle.

We quickly began an almost nightly ritual: making fresh guacamole using lots of fresh garlic, salt, and some of Mexico’s equally wonderful fresh limes. It was perfect with some locally made corn chips — also about a thousand times better than anything I’d tasted in America.

And then there was Romania, where Michael and I would stop at the local open-air market every other day after working out in a nearby park. We’d buy three big baskets of fresh berries — raspberries, blueberries, and blackberries — and take them home to eat on French toast or pancakes.

Or, hell, we’d just eat them plain. Once again, they’d been picked only hours before.

It’s not a stretch to say that in each one of the fifteen countries where Michael and I have now lived for at least a month, we’ve almost always stumbled upon some special local delicacy — and then proceeded to gorge on it almost every day until we left.

In Malta, we discovered a vendor near our apartment who sold empanadas filled with meat, potatoes, or mushrooms — and ended up regularly having them for lunch. We especially loved the curry chicken.

It’s almost impossible to get a bad meal in Thailand, but the food I remember most is the mango “shakes” we had at the end of almost every workday — just impossibly fresh mango blended with ice and a splash of sugar water. Before long, our favorite shake vendor was also adding fresh pineapple and coconut to the blend.

In Georgia, we couldn’t get enough of the khinkali dumplings — dough filled with herbs and cheese, meat, or potatoes, and then steamed, creating a broth inside that is so rich these dumplings don’t even need a dipping sauce.

In Istanbul, I enjoyed a daily freshly squeezed orange juice, available on every corner, and Michael loved the Turkish coffee.

In Bulgaria, we loved the lutenica — a sometimes spicy spread eaten on bread or crackers, usually made from stewed red peppers and eggplant.

And we were only in Armenia for three days, but it had the best bread I’ve still ever tasted — baked by slapping dough directly onto the wall of a hive-like stone oven, then later retrieved with a mitt-like utensil.

In each one of these countries, these food items were always embarrassingly cheap, at least from our American perspective. Plus, most of the time it was something very healthy. And we also knew it was only temporary: even if the food wasn’t seasonal, like the berries in Romania, Michael and I would soon be moving on to a different country.

So there was no reason to ever deny ourselves.

The different cuisines are obviously a huge perk of our traveling the world for four years now. We’ve had so many fantastic meals.

But these particular food items always stand a bit apart from the meals themselves.

In Italy, for example, we discovered that actual Italian food is pretty different from what we’d known back in the U.S. — much less about tomato sauces, heavy cheese, and thick garlic, and much more about grilled fish and all manner of seafood, fresh fruits and vegetables, and olives. Pasta is definitely a thing, but so are polenta, couscous, bruschetta, and risotto.

And yet, when I think about the food in Italy, what I most remember is the gelato.

For one thing, it really was terrific. I once asked an Italian friend why it was so good — that I’d had ice cream and even gelato all over the world, but the frozen dessert really did taste better in Italy.

“You must start with fresh, local ingredients,” she told me. “And you must never skimp on the flavors. There are so many more peaches in peach gelato than you might think. But that’s as it should be. The point is to make peaches that taste like ice cream, not ice cream that tastes like peaches.’”

I loved this answer, even if I’m still not exactly sure what she meant.

But Italian gelato sticks out in my mind not simply because it was so good. Getting gelato became an almost nightly ritual for Michael and me, walking together or with friends to get a small dish or cone at one of the dozen or so shops near our apartment.

In a way, those nightly gelatos wove together all the meals we had in Italy — all the food.

This happened in the other counties too. There’s real magic — and undeniable beauty — to the One Great Food we love so much that we eat or drink it almost every day.

For one thing, it seems to make all the local food more intentional. It regularly reminds us how amazing food can be and how much pleasure it can give — and also how privileged the two of us are to be traveling the world as we do.

But it also makes it impossible for us to forget that we will always soon be moving on — that whatever we’re enjoying is only temporary, so we’d better take advantage of it while we have the chance.

Eat, drink, and be merry, the satsumas are saying. Because tomorrow…well, you know the rest.

The satsumas are right. One way or another, I really will be moving on.

But before I reach my Final Destination, there’s still a lot more world I want to discover, and a lot more Great Food I can’t wait to taste.

Brent Hartinger is a screenwriter and author, and one-half of Brent and Michael Are Going Places, a couple of traveling gay digital nomads. Subscribe to their free travel newsletter here.