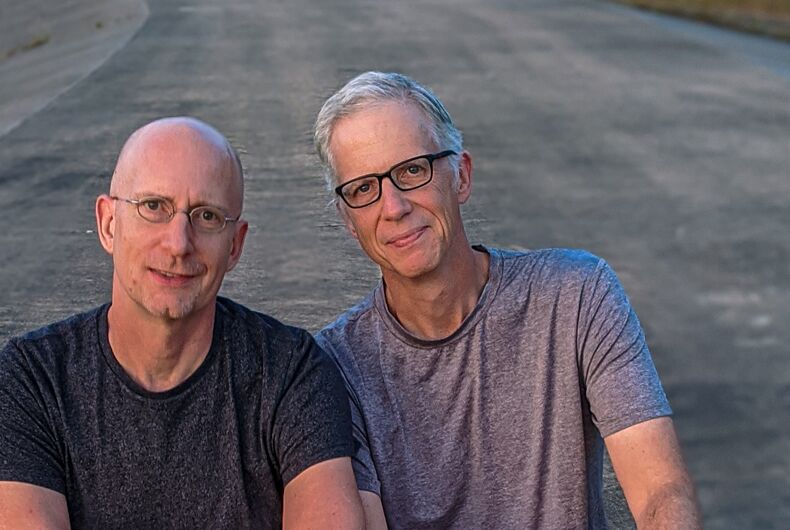 My husband Brent and I met 30 years ago this month, which isn’t as shocking to write as I thought it would be.

A lot has happened in the past three decades in our personal lives. But when it comes to LGBTQ issues, even more has happened. Frankly, there’s been an absolute revolution.

Related: Does DoorDash deserve to be deemed one of the “Best Places to Work for LGBTQ+ Equality?”

Things are especially bad in countries like Turkey, Bulgaria, Hungary, Georgia, and Croatia, where Brent and I have recently lived.

But even in these places, things are dramatically better than they used to be. If nothing else, the internet now lets most of the queer people of Planet Earth see how things are outside of their hometowns and countries. And it also lets them connect with each other through platforms such as Instagram, Facebook, Twitter, and, yes, Grindr.

LGBTQ people on Instagram can search #husbandandhusband, #wifeandwife, and #thisiswhattranslooklike, and see representations of themselves. On Facebook, they can join supportive groups and find solidarity and advice. And on any platform, they can publicize their own mistreatment at the hands of their government or family (assuming they’re not censored).

Man, that would have been great when I first realized I was gay.

Pride is now held all over the world. Even smaller cities in conservative countries, like our current home of Split, Croatia, have held Pride events – though the conservative places are not always accepting, as we saw for ourselves when we got tear-gassed during last year’s Istanbul Pride.

Back in America, the change is even more astonishing. The LGBTQ community has seen a string of local political victories and landmark legal ones, culminating in the 2015 Obergefell vs. Hodges Supreme Court decision which made same-sex marriage the law of the land.

Antivirals have made HIV/AIDS a manageable disease, and an HIV vaccine is currently being tested.

There are now so many out actors and singers that it’s hard to keep track of them all, and there are also now out professional athletes in the NFL, NHL, and Olympics.

Same for politicians. In 1992, when Brent and I got together, there were only a handful of out elected officials. Now there are almost a thousand – at least one in every state except Mississippi, including many lesbians and people of color. There are even two out female U.S. senators!

And let’s not forget Pete Buttigieg almost became the Democratic presidential nominee, becoming the first out gay person to ever win a presidential primary. Or that he’s currently serving as the first openly gay cabinet member.

On Netflix, there are now even gay Christmas romcoms and transgender programming by transgender creators.

Of course, things aren’t perfect even in America. Prejudice persists, especially for members of the trans communities, and clearly, there’s a backlash brewing on issues of racial, sexual, and reproductive rights. And you’d have to be a fool not to see the massive risk that the current Supreme Court presents to all these rights.

But 30 years ago, when Brent and I first met, we had almost no legal rights. Marriage equality wasn’t even on the radar, and the idea of a gay man being taken seriously as a presidential candidate was laughable.

AIDS was still ravaging our community, and LGBTQ people were basically invisible in popular culture. When we were visible, it was often downright offensive portrayals, like the movie Basic Instinct.

Even so, it seems wrong to me, even counterproductive, to deny our community’s incredible progress. Things are better now, and I think it’s okay to say that. We live in an age of cynicism, and there’s always an eager online audience for defeatism.

But the fact is, in many ways, LGBTQ people won the battle for America’s hearts and minds – and we’re winning the battle in the rest of the world, especially among young people.

If anything is going to thwart the current LGBTQ backlash, it’s going to be that particular victory, which I think we still need to cultivate. How do we frame our arguments in ways that will win more hearts and minds? In the end, the opposite of hate and fear is still hope and love.

My husband and I have been together 30 years, and in that time, we’ve seen incredible changes. We both plan to be around 30 years from now – and maybe even another 30 years after that.

Here’s hoping the next 30 and 60 years will be as exactly as transformative as the last.

Michael Jensen is a novelist and editor, and one half of Brent and Michael Are Going Places, a couple of traveling gay digital nomads. Subscribe to their free travel newsletter here.