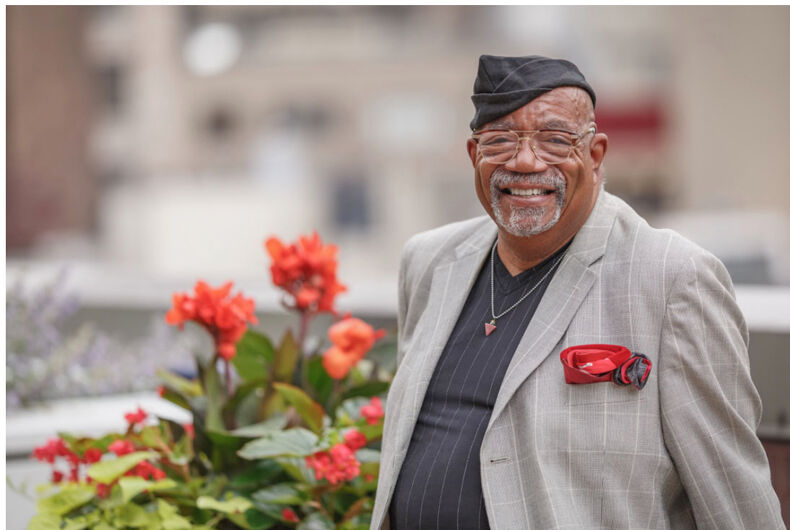 The year: 1969. Man landed on the moon, the Beatles gave their last concert on top of the Apple building in London, and we mourned Judy Garland’s death. But most notable for me was the Stonewall Uprising on June 28.

As a gay African-American man, I am an activist and a pioneer. I have experienced some of the brightest and darkest highlights of LGBTQ history. So much has changed and I know my generation has made a significant contribution to the growth and positive changes. My mantra: “I’m living my best life!”

Related: The legacy of Black LGBTQ leaders is at stake

The year of the Stonewall Uprising, I was beginning my studies at Parsons School of Design. It was a turning point in my life. I felt equipped to leave my family nest and ready to be independent, a trait that was instilled in me at an early age.

As soon as I arrived in New York, the city was swarming with so much energy that it was hard to contain myself. New York City has always been a significant influence on gay life, art, music, fashion, commerce, and innovations on all fronts. I took some time to discover myself during those years, learning to navigate the city and indulge in self-expression.

The diversity of New York is something I have always loved. In fact, it was the openness and freedom of expression that led me to accept my sexuality. I gradually acclimated to my new life and adventures, only later realizing what an accomplishment it was to move to New York City and succeed at the tender age of 18.

As a textile designer and artist in the Garment District, I continued to take drawing classes at the Leslie-Lohman Museum of Art to keep my skills sharp. While in the workforce, I complied to corporate standards in the workplace to be taken seriously and avoid discrimination. But even so, I accepted my truth and began to live unapologetically as a gay African-American man.

One of the hard truths I had to learn – and something many people still refuse to acknowledge – is that the LGBTQ community has always been splintered and separated. I made it a point to nurture friendships with young gay people, mostly people of color. Most of my gay and bi friends attended venues that attracted people like me, where nightlife was flourishing and the creative community thrived. We saw diverse venues like David’s Loft in Manhattan, the first private dance club, as well as Andre’s, Jays, and the Big Apple in Harlem, all catering to people of color. I saw the 70’s as a “Golden Age” of gay life and freedom of self-expression.

Overwhelmed with a thirst for knowledge and enthusiasm to discover more about the LGBTQ experience, I moved to Berlin, Germany, in 1979. I was influenced by many Black figures who paved the way, including Josephine Baker, Richard Wright, and James Baldwin. Moving to another country allowed me to escape racial disparities back home.

I was emboldened to continue advocating for LGBTQ people of color, which became crucial as we were hit with the HIV/AIDS epidemic. As a result of attending so many funerals weekly, I became exhausted and fearful for my own health. I moved back to the U.S., making the best of my time in the Midwest professionally, but also prioritized being an advocate for HIV/AIDS and the LGBTQ community as a whole.

Together, gays and lesbians organized community events, prepared meals, and initiated housing projects for suffering people who had been on the street. Fundraisers were held to raise money for those in need. Organizations like AmfAR (the Foundation for Aids Research) made their debut, as well as the drag ball Night of a Thousand Gowns and the Design Industry Foundation for AIDS. The late great Larry Kramer founded Gay Men’s Health Crisis and ACT UP, two organizations that changed the narrative in New York City and the world, invoking lifesaving solutions and resources for the LGBTQ community.

In 1995, the introduction of protease inhibitors – drugs that impede the spread of the virus – added longevity to a generation that did not expect to survive.

Returning to New York in the early 2000s and having reached my 50th birthday, I began to think about how I was beginning this stage in my life. My generation of LGBTQ folks have now become elders, with organizations like SAGE helping us age with dignity.

As we age, there are challenges in housing, healthcare, and other life support systems for our cohort. Many of us do not have families and face discrimination and isolation because of our sexual orientation, making LGBTQ elder support groups critical. I remain an advocate for older adults so we can keep our independence as we age.

As I continue to share my experiences before and after 50 years of Stonewall activism, I age with pride and dignity.

Alston Green is a longtime activist and fighter in social justice and LGBTQ movements. A creative thinker and a passionate spokesperson, Alston has worked with the Intergenerational Media Literacy program with Senior Planet (OATS) and SAGE – two organizations that offer aging adults an opportunity to explore, learn, mingle and renew their passions, to keep abreast of the ever changing world of digital technology and how it impacts everyone’s lives daily.