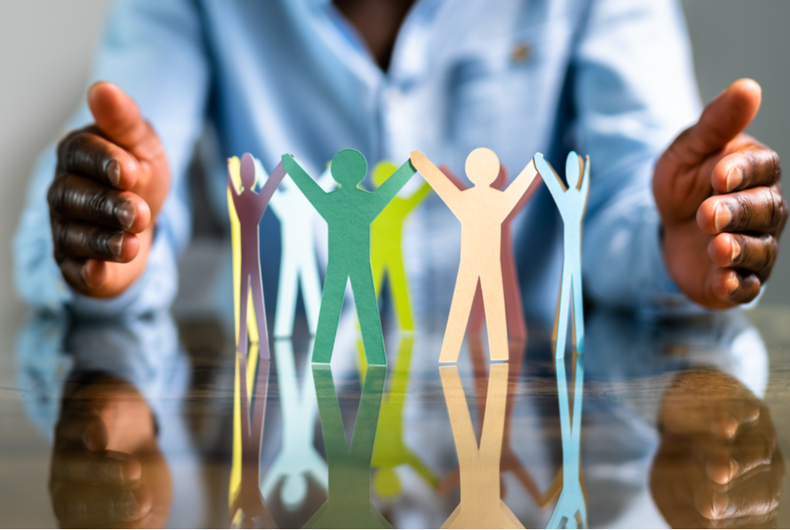 This year, in honor of Black History Month, AARP is celebrating people who are making a difference for those living at the intersection of being Black and LGBTQ at this exciting but trying time in the nation’s long march to full inclusion. While the Black queer community has found increasing support and acceptance, obstacles remain.

Two groups fighting the good fight, in particular, come to mind. The first is the National Black Justice Coalition, helmed by David J. Johns. In 2013, Johns was appointed as the first executive director of the White House Initiative on Educational Excellence for African Americans by President Obama before joining NBJC in 2017. Founded by Mandy Carter in 2003, NBJC excels at everything from lobbying Congress to anti-violence and youth suicide prevention work.

And then there is Native Son, directed by Emil Wilbekin, the former managing editor of Essence.com. The organization, founded in 2016, is a “global platform that illuminates Black gay/queer men and assures them of their “worthiness and purpose in all communities in which they exist.”

We chatted with Johns and Wilbekin on the eve of Black History Month on behalf of AARP. Here’s what they had to say about their work and the importance of this pivotal time that aims to recognize Black history and celebrate Black contributions.

Hey Emil! Thanks for taking the time to chat with LGBTQ Nation. How Did James Baldwin’s Notes of a Native Son inspire you and your org?

Notes of a Native Son was James Baldwin’s first non-fiction book which was published in 1955. It’s a collection of essays that focus on the issues of race, identity, and social justice. Mr. Baldwin is our icon because as a Black queer man, he audaciously spoke out about Black representation, civil rights, racism and issues that plagued the Black community over 65 years ago that are still relevant today. That’s where the name Native Son comes from.

Tell us about the work you are doing in the community. What is your most important project now?

Native Son is a movement, community and platform created to inspire and empower the Black gay and queer community and to harness our collective power. Our focus is amplifying the voice and visibility of Black gay and queer men, creating community and safer spaces and ensuring that our existence is seen, heard, and respected. Native Son was created on social media five years ago and is thriving. We are focusing on addressing the issues of the community through wellness, empowerment and amplification. Building our media platform so that we can address these issues through storytelling the way Mr. Baldwin did is our priority this year. There are so many stories that need to be told to help uplift the Black gay community as well as the Black community holistically especially in the areas of HIV, mental health, identity and representation.

How is your organization’s work making an impact?

We have grown our community from zero to 47,000 on social media by creating community, shifting the narrative of Black gay and queer men, and showing the community diversity and representations. Ebony magazine honored us on their Power 100 List in 2021. That is clearly making an impact on the Black community because we are bringing Black gay and queer men and their stories out of the shadows and into the light in an effort to create more visibility, cultural understanding and to minimize the shame and stigma many Black LGBTQ folks feel in the Black community.

How is your organization’s work making an impact?

Black gay and queer men are often marginalized or ignored in the larger LGBTQ+ community. Native Son is ensuring that we are not erased and that our stories, representation, contributions, and existence are front and center. We support our LGBTQ+ brothers and sisters, but we also want to make sure our community is healthy and whole.

What does Black History Month mean to you?

Black History Month is a time for us to celebrate and honor Black people from the African Diaspora who have made a significant impact in the Black community, in their professions and on the world. I don’t love that it’s regulated to one month just like I don’t love that Pride is once a year. But it is important to recognize our ancestors, elders and the current leaders, innovators, champions, mavericks, and winners in our community.

What is the biggest challenge you face and what are you most proud of in your work?

The biggest challenge I face as the founder of Native Son is building something from nothing, having a vision for something that doesn’t exist is hard for anyone who is building community and building a business at the same time. We are doing a lot to support the community, but there is so much more that needs to be done. The work never stops, but that is what service is all about.

A lot of people celebrate Black History Month but not everyone actually aids the cause of civil rights. How would you suggest people get involved in helping out?

There are so many ways that people can support civil rights and help community organizations like Native Son to make a difference. Follow us on social media, donate to Native Son to advance the work of amplifying the voice and visibility of Black gay and queer men, and become an ally for us.

Participation is the best way to make a difference during Black History Month.

Hi David! Thanks for chatting with LGBTQ Nation. What is your most important project now?

It’s important for these questions to be reframed through the lens of intersectionality. So much of our work is reminding everyone that there are so many possibilities, including coalitions, in the intersections–in acknowledging that there have always been Black LGBTQ+/SGL people and that both Black and LGBTQ+ communities are incredibly diverse.

To that end, we’ve launched the Good Trouble Network, the first-ever political action network for the Black LGBTQ+/SGL movement, and released Lavender Book – a guide to safe spaces for members of the Black and LGBTQ+ communities.

What does Black History Month (BHM) mean to you?

Black History Month is an opportunity for us to celebrate the rich contributions that Black LGBTQ+/SGL leaders have and continue to make.

What is the biggest challenge you and our community face?

And what are you most proud of?

I am most proud of the many contributions that Black LGBTQ+/SGL people make to families, communities, corporations, and our countries.