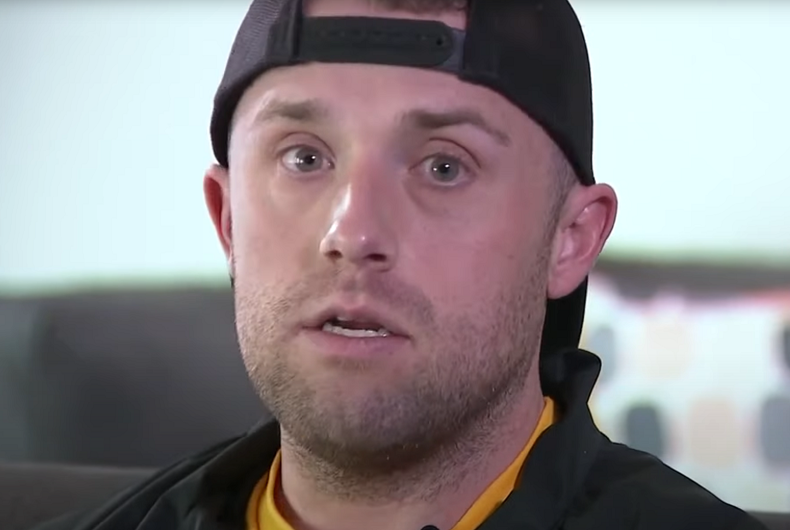 A gay hockey fan was the victim of an alleged anti-gay hate crime when three men who supported the opposing team kicked and punched him after a game and shouted anti-gay slurs at him.

Caiden Shaw, who lives in Denver, just wanted to support his favorite team, the Boston Bruins, at a match in Denver on January 26. But his night out at the rink turned violent, leaving him with injuries all over his body.

Related: A woman trashed a gay man’s apartment in a possible hate crime

“It makes me think back to that younger kid whenever I didn’t want to come out to fully be myself, and the reasons why you don’t do that, or why you’re scared to,” Shaw told Denver7 News.

He said that he was leaving Ball Arena in Denver after the game when three fans of the city’s NHL team – the Colorado Avalanche – approached him.

“At first, it was more of a hockey banter type of thing from them. ‘Oh you lost,’ that type of thing,” he said. “I remember saying something along the lines of, ‘We’ll get you next time.'”

But then he said the exchange got heated and the three men started shouting “aggressive homophobic slurs.” One of the men got in Shaw’s face and said, “You can’t take this, faggot.”

Shaw said that he nudged that man to get him out of his face because he was afraid. That’s when they attacked.

“From there, they tackled me to the ground and were calling me faggot, gay,” he said. “My head was in my arms, and I was kind of in a ball while they were kicking me and punching me.”

He said that he has knee injuries, bruising on his legs and arms, and a knot in the back of his head. But he said the psychological damage is the worst outcome, since he left his home town in the South for Denver to escape that kind of homophobia and now he doesn’t feel safe.

The Denver Police Department has confirmed that their Bias Motivated Crime Unit is investigating the attack but hasn’t said if it was caught on surveillance footage.