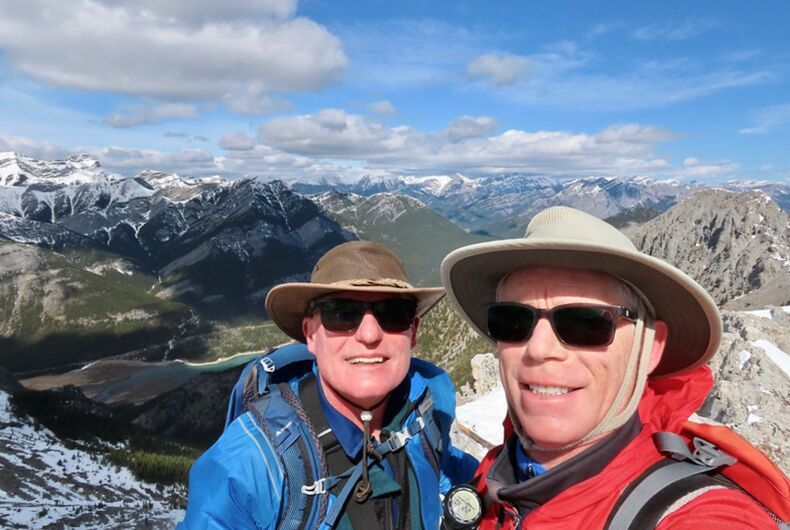 In the 25 years they have been together, they have spent their free time hiking, climbing mountains, biking, and traveling to remote places.

As they became more skilled as hikers, they realized it was an activity they could do year-round and not just in the summer months. So they decided it was time to do something big.

The project began last January and often required them to climb multiple mountains per week. Throughout June, July, and August alone, they made it to 36 peaks. By September, they made it to peak 65.

Berg loves setting big goals for himself and told LGBTQ Nation that “hiking or doing anything with a purpose just adds to the experience.”

But for him, this project held a greater purpose than just accomplishing his goals for himself. He also hopes his story shows LGBTQ young people what life can be like when they’re older. This hope is in part what inspired the couple to keep a video diary of their climbs and post them on YouTube.

“It does get better,” Berg said, “You can make a life for yourself. You can pursue your passions, whatever they are.”

Berg said many LGBTQ young people struggle to believe they will ever get old, and he hopes his and his husband’s story shows that it’s possible not only to survive, but also to thrive.

As part of their journey, Berg and Welsman also took photos of rainbow flags waving at the summits as a way to celebrate gay visibility in the hiking community, which Berg said is sorely lacking.

“I felt proud that perhaps it might open up eyes to the wider community to say that gay people aren’t just what you might think they are,” he said.

For Berg, it also meant the world that he and Welsman took on this challenge together.

He says it’s rare to see couples of any sexuality hiking together. Many of the people they meet on the trails are either single or have partners who they left behind at home.

“I think all the things that make this accomplishment unique is not just that I’m over 65 or that we went up eight Mt. Everests in a year,” he said. “I think it’s also that we did it as a couple.”

When they finally reached that 65th peak – Alberta’s Mt. Richardson – Berg said the overwhelming feeling was relief. Nevertheless, they managed to celebrate by traveling to New York and summiting yet another mountain, Wright Peak.

Since then, however, the couple has been taking a well-deserved break, still taking walks every day but letting their bodies rest from the demanding nature of the mountains.

Berg wants people to know that summiting these mountains required a great deal of experience, skill, and knowledge – and that just because he’s 65, doesn’t mean just anybody can do it.

“The mountains are inherently dangerous,” he cautioned, “and you need to be prepared for as many contingencies as you can.”

While Berg and Welsman stayed away from any technical climbing, their hikes were still incredibly challenging and often involved something called scrambling, which is when you have to use both your hands and feet to climb up steep portions of the trail. There is also weather, mapping, and so many other challenges one must expect and be prepared for.

That being said, Berg does believe in exploring your passions with the right time and effort put forth. That effort, he emphasized, is key to accomplishing your goals.

“The mountains didn’t come to us,” he said. “We had to go to the mountains.”

It is time to start celebrating Black asexuality in media