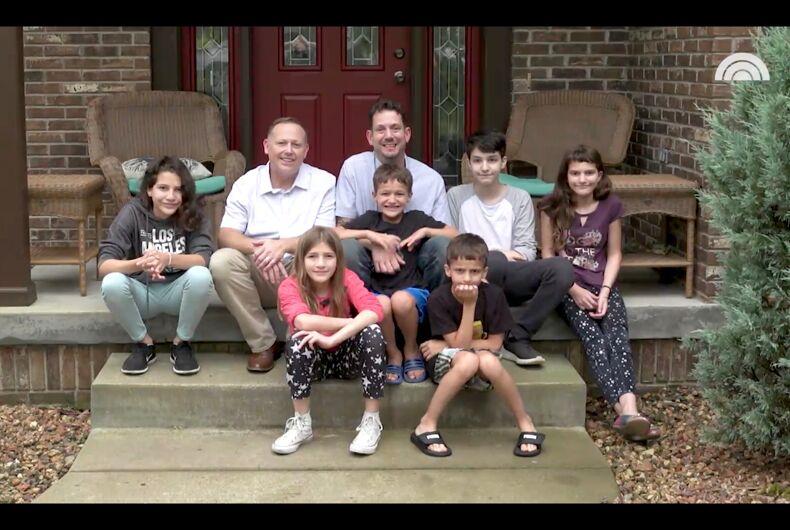 A gay Pennsylvania couple who adopted six brothers and sisters is celebrating three years of officially being a family of eight.

“It’s been almost three years… look how the kids have grown!!” wrote one of the dads, Steve Anderson-McLean, in a Facebook post. “Rob and I haven’t aged a bit… hahaha!”

Steve and Rob took in Carlos, Guadalupe, Maria, Selena, Nasa, and Max after the siblings spent five years in foster care. They had been removed from their biological parents’ care due to abuse and neglect.

Good Morning America reported that the couple – who has now been together for over 20 years and also raised two previous sons that are now adults – decided they “weren’t done” with parenting and began thinking about adoption.

They decided to adopt siblings after learning about how often they are separated from one another.

“Such a staggering amount of sibling groups are broken up and it broke our hearts,” Steve said.

They discovered the kids that would become theirs on an Ohio website.

The kids moved in with Rob and Steve in 2018, and they were all very quick to bond.

“After the first week they were asking if they could stay forever,” Steve told TODAY Parents. “We took them to the park and to the zoo. We played in the yard. That was all new to them. Having fun was new to them.”

The couple initially worried that their oldest son, Carlos, might struggle with having same-sex parents.

“We thought with Carlos being a teen, he might have a hard time,” Steve said. “But it has not bothered him one bit.”

The kids were officially adopted in 2019 on a day that was filled with emotion.

“The judge asked, ‘Do you understand at this point forward they are your children? They are just as much as your biological children,'” Steve said. “Obviously we knew that, but when I looked up and saw all those eyes, it was very emotional. We never imagined we’d be lucky enough or blessed enough to have six.”

Rob added that the kids “have brought a great kind of crazy to our lives.”

The kids, themselves, were also so happy to officially be adopted.

“They had been let down by adults so many times in their life, and were nervous it wasn’t going to happen,” Steve said.

Steve recently shouted out Rob on Facebook for Valentine’s Day, calling him his “rock and best friend”

“What a life we have built!” he wrote.