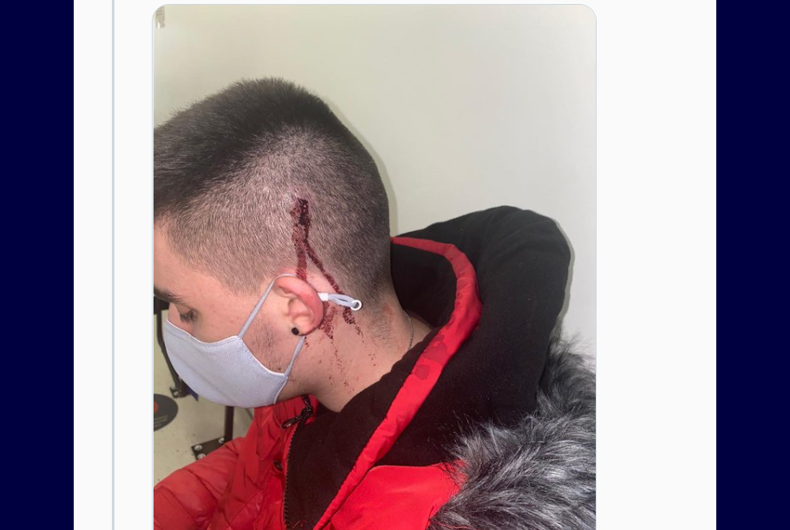 Harry Batt posted about the attack to social mediaPhoto: Screenshot

A 21-year-old gay man was left bleeding from his head after he was the victim of what he says is an anti-gay hate crime.

Harry Batt said that he was just waiting to take the bus home from Heaven, an LGBTQ nightclub in London, this past weekend when a woman shouted anti-gay slurs at him before punching him in the head.

“Some girl out of nowhere came up to me and starts hurling homophobic slurs directed towards me and getting aggressive,” he told ITV News. “And then she just started punching me in the head, multiple times.”

“There’s a scuffle and friends try to pull her away and as soon as she does it [punches] she runs off into the road and flees the scene.”

He said that she was wearing a ring, which cut into his skin. By the time the alleged assailant left, he was bleeding from his head.

Batt reported the attack to police and gave them video evidence. He also posted about the attack on social media.

“I don’t wish to scare anyone, but unfortunately last night I fell myself victim to a homophobic attack whilst waiting for a bus home outside heaven nightclub in London,” he tweeted. “A girl came up to me and started throwing homophobic verbal assaults at me unprovoked, which I said to her she couldn’t say to me or I would get the police involved. she proceeded to punch me multiple times in the head, leaving me with a bleed, before rapidly fleeing the scene.”

couldn’t say to me or I would get the police involved. she proceeded to punch me multiple times in the head, leaving me with a bleed, before rapidly fleeing the scene. the incident is being dealt with by the police. i am not posting this for people to feel

Metropolitan Police said in a statement that they’re reviewing security camera footage in the area and are working with British Transport Police as well, since the attack took place at a bus stop.

“We have continued to improve our proactive and reactive work in order to support the LGBT+ community,” the statement said. “Specifically, the Met’s 125 volunteer LGBT+ advisers link in directly with the community to listen to concerns, feed directly back in to the service and encourage reporting of crime.”

Batt said that the attack is a reminder that equal rights, like marriage equality, don’t mean that there are no longer people who hate LGBTQ people, especially as hate crimes are on the rise in the U.K.

“Just because we have rights in law doesn’t mean that everyone is truly accepting of it,” Harry said. “It won’t stop me living my life, it won’t stop me from going out, enjoying life and being myself and make me be a bit more careful coming out of these places.”

“The streets on a Friday and Saturday night are horrible at the moment you can feel an atmosphere at times,” said Heaven owner Jeremy Joseph, referring to tensions as lockdown restrictions ease.

He said that the city needs better security cameras, more lighting, more police, and the return of nighttime subway service.