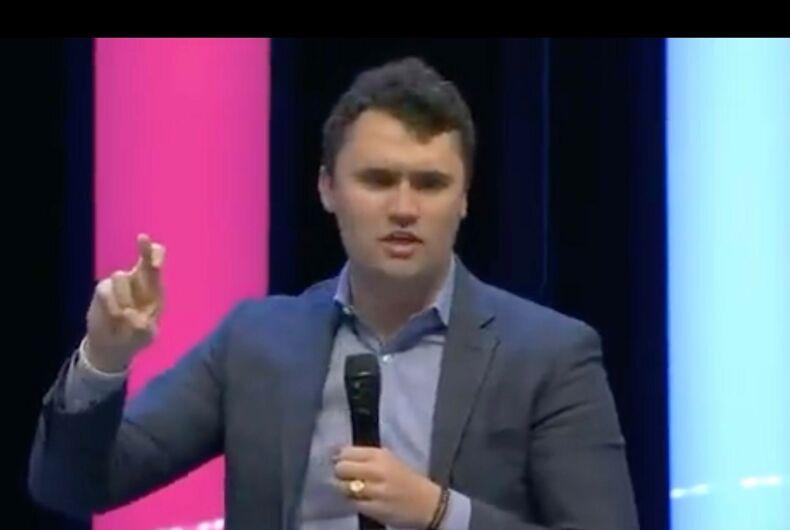 “The transgender movement is an introductory phase to get you to strip yourself of your humanity to mesh with machines,” he said.

“It’s called trans humanism. They want you to say, ‘ok, well I can choose any gender, why can’t I just have an exoskeleton of some sort of machine around me?”‘

Kirk claimed turning human beings into machines is one of the major goals of Silicon Valley and tech advances like the metaverse.

“This is why they’re so insistent on this transgender thing,” he said. “Because if you stop being a man, then maybe you can stop being a human being. Maybe you can just plug into some sort of machine.”

Kirk expressed fears that somehow the transgender movement is leading to a world where we plug into a machine all day and are controlled by companies.

Kirk founded Turning Point America and Students for Trump. He has cheered the Big Lie and promoted several of former President Donald Trump’s worst conspiracy theories. He agrees with Trump’s blatant racism and helped to stoke the Capitol insurrection by MAGA followers.

Charlie Kirk warns "the transgender movement is an introductory phase to get you to strip yourself of your humanity to mesh with machines," adding "if you stop being a man, then maybe you can stop being a human being" pic.twitter.com/kGs1dxcHil

And Kirk is not the first person who has touted this concept of trans humanism.

Recently, one of the leaders of the anti-vaccine movement claimed on TV that the goal of the government’s response to the COVID-19 pandemic is to make people “either chronically sick or turn them into transhumanist cyborgs.”

Dr. Sherri Tenpenny of Ohio is an influential source of COVID-19 misinformation, and she has also got a history of anti-LGBTQ statements, especially about transgender people.

She appeared on The Stew Peters Show, a show that calls people who get vaccinated “shot goblins” and claims that the vaccines will result in “American killing fields,” and said that “the stated goal is to depopulate the planet and the ones that are left, either make them chronically sick or turn them into transhumanist cyborgs that can be manipulated externally by 5G, by magnets, by all sorts of things.”

She did not explain what exactly a transhumanist cyborg is, but she has attacked transgender people in the past, including making jokes at the expense of transgender people’s identities and implying Pope Francis “works for” an LGBTQ cabal.

Kyrsten Sinema is raking in big bucks from donors. Too bad most of them aren’t her voters.