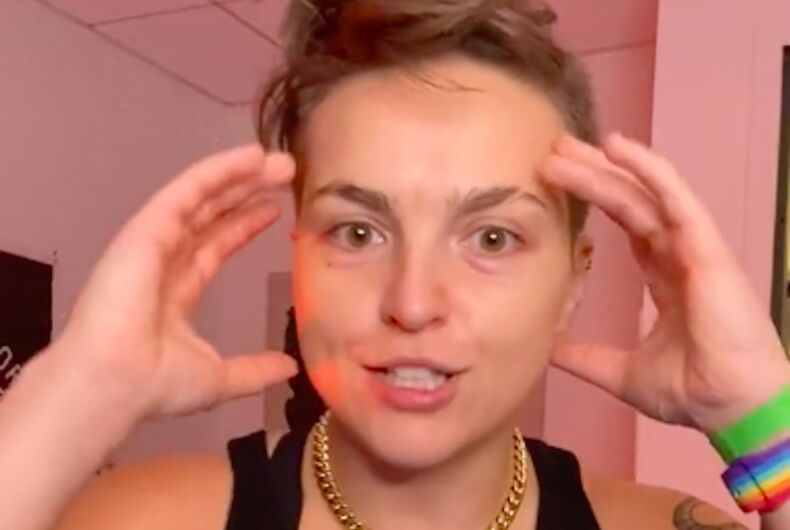 When Lizzy Bristow decided to spend the holiday with her girlfriend’s family, she never imagined she’d end up having to save the life of her girlfriend’s homophobic 91-year-old grandmother during Christmas dinner—but that’s exactly what happened.

Bristow described the ordeal in a video that has since been viewed nearly 7.4 million times on the video-sharing app TikTok. She also spoke to LGBTQ Nation about what happened and how others can prepare themselves for similar emergencies.

Bristow and her girlfriend have been dating for about a year and a half. Her girlfriend’s family has always been supportive of their relationship. They even affectionately refer to Bristow as “Two” since her girlfriend’s has the nearly identical first name of Lizzie — Lizzie is number one, and Lizzy is “Two.”

The couple spent Christmas 2020 with her girlfriend’s family, but because of the COVID-19 pandemic, her girlfriend’s grandmother didn’t attend. This year, however, the grandmother joined, along with nine other family members for a celebration and delicious steak dinner.

Before the meal began, Dana noted Bristow’s short hair and asked if she liked wearing it short. Bristow said yes. Then Dana asked Bristow if she “was the boy” in her granddaughter’s relationship.

The homophobic undertones made Bristow feel uncomfortable. But before she could respond, her girlfriend jumped in and said, “Actually grandma, I’m the boy.”

As the grandmother continued eating, the older brother noticed the woman looking down and silently struggling to swallow.

“Grandma, are you okay?” he asked. The grandmother didn’t answer.

“Grandma, are you choking?” he asked. All of a sudden, Dana’s face turned blue.

Bristow stood up and asked, “Does anyone know the Heimlich?”

The older brother tried for a moment to help his grandmother, but he didn’t seem to know what to do because he wasn’t CPR certified. Bristow, on the other hand, was.

Bristow is a personal trainer of 11 years who runs Body By Daddy, a business that creates fitness programs tailored specifically for LGBTQ+ people with different body types. As a personal trainer, she maintains her CPR certification.

When Dana passed out in her arms, she knew that she had to administer CPR immediately rather than the Heimlich maneuver because the woman was no longer conscious.

She laid the old woman on the ground and immediately began chest compressions while everyone was freaking out. Someone yelled to call 911. One of her girlfriend’s brothers ran out to alert firefighters at the station nearby. Her girlfriend and girlfriend’s mom began crying loudly over her. Her girlfriend’s father was leaned down next to Bristow, watching his own mother dying before his very eyes.

Bristow stayed focused, however, and the family let her take control of the situation.

“Knowing that they all felt confident in me just allowed me to make [the rescue] even more so,” she added. “It’s a really, really an incredible family.”

Bristow administered chest compressions, timing them to the chorus of the Bee Gees’ 1977 disco song “Stayin’ Alive”, a trick she learned in her CPR certification course. She gave chest compressions and not rescue breaths because the breaths could’ve blown the food back into the old woman’s throat.

“Now I’m over her, and I’m giving her compressions, probably breaking her ribs,” Bristow said in her TikTok video. After what seemed “like forever later, all of a sudden her lungs breathe back at me. and I’m just like, ‘Oh my god! Come on, Dana. Come on, Dana!'”

A couple of chest compressions later, a quarter-sized piece of steak appeared in the woman’s mouth. The father pulled the food out, bringing the color back to the old woman’s face.

Bristow then stood up and said, “Yes!”

“I felt like I won the Superbowl,” she said.

Other members of the family surrounded Bristow, thanking and hugging her. Soon after, the firefighters and ambulance arrived and tended to the grandmother. Although she refused medical care that night after regaining consciousness, an x-ray the next morning showed that the CPR had broken all of the old woman’s ribs.

Breaking a person’s ribs is necessary in CPR in order to effectively pump blood into a person’s heart via chest compressions. The fact that the woman was 91 with brittle bones didn’t help either. None of the ribs were displaced, however, which suggests that Bristow’s chest compressions landed consistently in the same area.

Later, in a family text exchange, one of the brothers sent an image of an angel and declared, “It’s Two!” (the family’s nickname for Bristow). The other family members began texting, “Praise Two!” and “God bless Two!” grateful for her life-saving skills.

“I think I think everyone should know CPR because it can be the difference between life or death,” Bristow told LGBTQ Nation. “And you never want to look back on a situation and go, ‘Oh my God, I wish someone in the room would have known CPR.'”

“If I wouldn’t have been at the dinner, no one would have known CPR, but she would have just choked and probably died,” Bristow said.

However, despite her heroism, Bristow breathlessly told her TikTok followers. “I never want to do that again.”

The longest 5 minutes of my life #christmas2021 #grandma #cpr