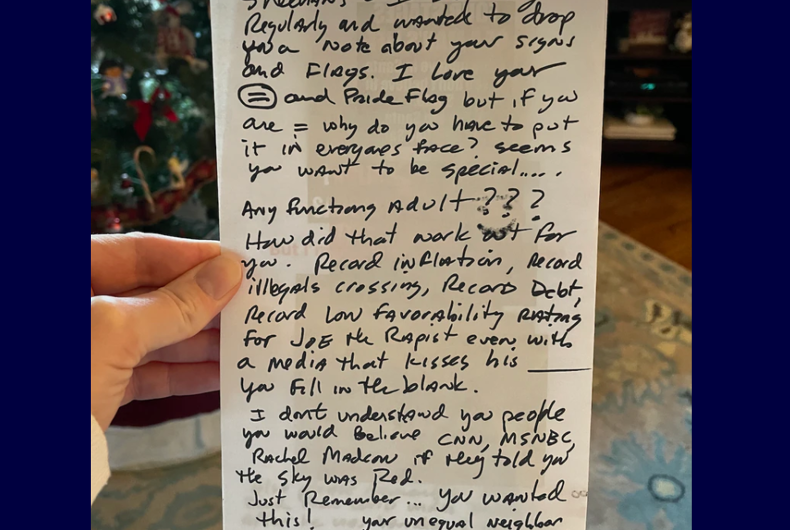 A lesbian couple is speaking out after getting a hateful Christmas card from an anonymous neighbor.

Melissa Sheehan of Wilbraham, Massachusetts said that she found the card on December 23, just days before Christmas. Sheehan and her wife Kelly live with their kids, who are 14- and 16-years-old.

Related: Granny lost her appetite when she saw a gay couple on TV. A 9-year-old girl had the best response.

She said that one of her kids asked her last year why their family didn’t have any Pride gear outside their home, so they put up a rainbow flag, a Black Lives Matter sign, and a trans pride flag outside their house.

The envelope had no return address but it was postmarked. It contained a card with a picture of Santa Claus stuck in snow.

But then she read what was inside: a hateful rant full of grammatical errors from someone who was mad about their flags.

“Sheehan’s – I drive by regularly and wanted to drop you a note about your signs and flags,” the letter read. “I love your = and pride flag but if you are = why do you have to put it in everyones face? Seems you want to be special.”

The letter then went on to attack Democrats, calling them out for a sign they put up last year supporting “Any functioning adult” over Donald Trump.

“Any functioning adult???” the letter said, blaming the Sheehans for “record inflation, record illegals crossing, record debt, record low favorability rating for Joe the rapist even with a media that kisses his ________ you fill in the blank.”

The letter was signed “your unequal neighbor,” as if equality for LGBTQ people comes at the expense of equality for other people.

“Just comedy, bringing comedy the world right now,” Sheehan told MassLive. “The sign was awesome. There are so many people stopping, taking pictures of it so we left it up for quite a while.”

“As I’m reading the note, I really wasn’t angered,” she said. “It was more laughing just out of the closed-mindedness of individuals.”

Kelly Gray-Sheehan posted an image of the sign to Facebook and tried to make it something positive by directing her friends to donate to The Trevor Project, a nonprofit organization that fights LGBTQ suicide.

“I wanted to share the beautiful Xmas card we received from an anonymous person in town. What I find crazy though, is this person didn’t sign the card when so much love went into it. You would think they want to take credit,” she joked.

“If anything, we can turn some of the hate in this into some donations for the Trevor Project. It’s kind of a win-win for everybody,” Melissa Sheehan said. The family raised $500 for the organization, they said.

“That sends a message that we don’t tolerate hate.”