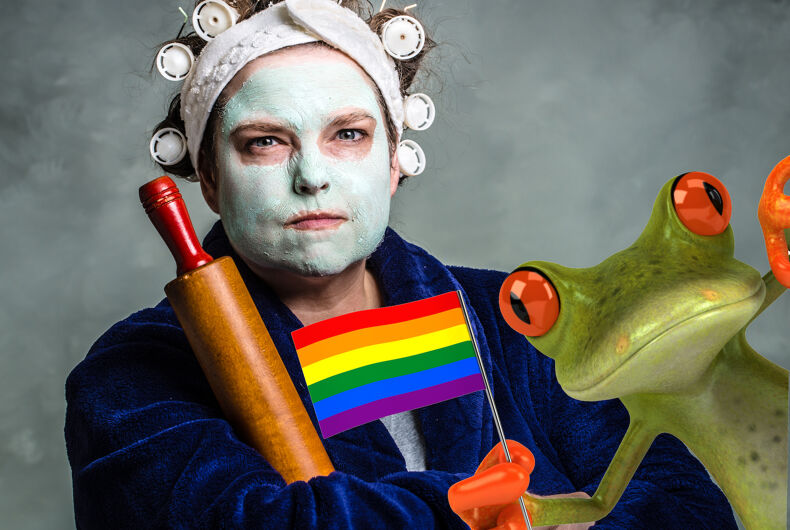 A 16-year-old nonbinary lesbian TikTok user has begun an ongoing saga in which they troll their religious and homophobic mother for thinking that frogs are an LGBTQ icon.

It all began with a video, now viewed over 2.2 million times in which the teen’s mom strangely declared, “The frogs are gay.”

The teen then asks, “Can you elaborate on that?”

“All of your frog t-shirts have a gay thing on them,” the mother says.

An inaudible man’s voice, presumably the father’s, then interrupts before the teen replies, “They don’t. They’re just frogs. All of my t-shirts just have frogs on them and they don’t have anything else.”

The dad responds, “It’s just wait-and-see because I want to look at a shirt myself.”

The teen then says, “Okay so, all of my Care Bears and frog clothing is being policed now.”

Their parents then laugh.

The teen then issued several follow-up videos. In one, they pledged to wear a sparkly t-shirt that reads, “Save the frog-gays.” The video has a dance remix of anti-LGBTQ conspiracy theorist (and recent spouse abuse survivor) Alex Jones talking about how chemicals in the water “turn the freaking frogs gay.”

In another video, the teen teases their mom by telling her that all animals are considered gay now — “like a secret handshake” — after their mom said that squirrels aren’t considered gay symbols.

Weirdly, in another video, the mom cites an opinion article published by a student writer at Florida International University that claims, “a frog or representations of frogs is considered an indicator of queerness, and are sometimes even called the ‘choice pet’ and ‘mascot’ of the LGBTQIA+ community.”

The writer says the frog emerged as a queer symbol because of Alex Jones’ “gay frog” conspiracy theory, the Biblical God’s use of frogs as a plague and the homo-encoded Frog and Toad children’s books written by gay author Arnold Lobel.

While the entire TikTok saga sounds laughable, the teenage TikToker added the following hashtags to their original video: “#homophobicparent #religiousparents #religioustrauma #mommyissuess”. In another video, the mother threatens to throw the teen out of the house if they keep playing gay music.

In short, living with a homophobic parent is rarely a laughing matter, even when glittery toy frogs are used to troll the hell out of them.