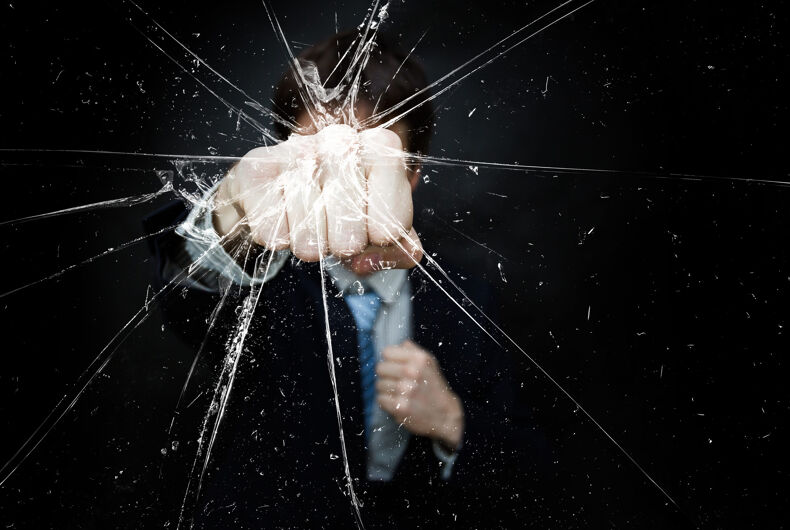 San Diego police arrested a 40-year-old man named Robert Frank Wilson for allegedly shouting homophobic slurs at his neighbor in the neighbor’s driveway and then attacking him. He now faces a hate crime charge.

Wilson allegedly blocked the neighbor’s driveway, shouted homophobic slurs at him, then reached into the neighbor’s vehicle and hit him in the face, according to the San Diego County District Attorney’s Office.

Related: Conspiracy-monger Alex Jones’ wife nearly killed him in front of their kid on Christmas Eve

The attack allegedly took place on November 10, though Wilson recently pleaded “not guilty” to the charge.

Legal authorities also said that on December 18, Wilson allegedly broke a city law when he and others hung “a large anti-Semitic poster on the fence of an Interstate 805 overpass,” KGTV reported.

“This case and these events demonstrate that those who are motivated by prejudice often spread their hate around to various groups, attacking our neighbors on the basis of race, religion, sexual orientation or other grounds,” San Diego County District Attorney Summer Stephan said.

“Hate against one group is a threat to everyone and we won’t tolerate these crimes in our community,” she added.

If convicted, Wilson faces up to three years and six months in prison.

Reports of anti-LGB hate attacks in California dropped in 2020, according to the California Department of Justice and attorney general.

Often, hate crime statistics can be misleading because they depend on people reporting these incidents to legal authorities. However, some queer people may not report such attacks over worries that it may cause them to be outed or that legal authorities will mistreat them due to anti-LGBTQ bias.

Prosecutors don’t always pursue hate crime charges against LGBTQ people either, because the legal burden of proof to get a conviction is higher than a general assault charge.

In hate crime cases, prosecutors must prove that the attacker demonstrated clear hatred against a certain community, either by making bigoted statements or having a history of hating that community.