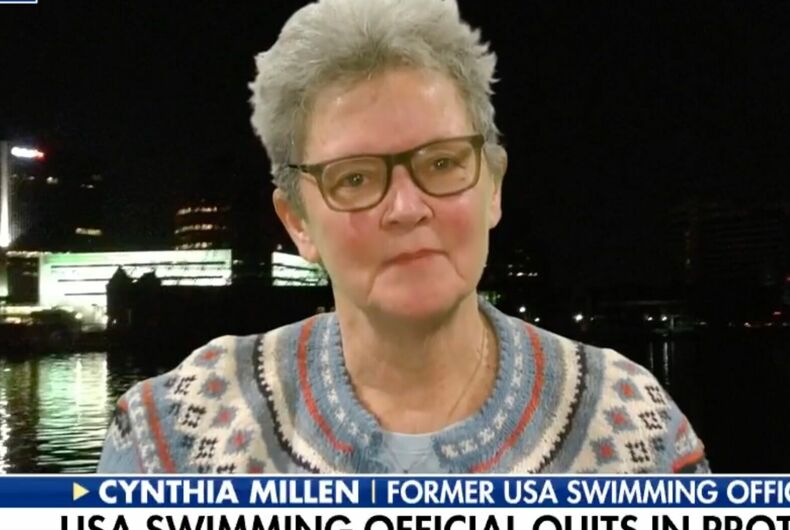 The wave of attacks on trans women in sports have recently centered on college athlete Lia Thomas, a trans senior at the University of Pennsylvania who has been breaking records in women’s swimming.

Due to her success, Thomas is facing intense scrutiny and criticism, despite the fact that she has has followed NCAA guidelines for trans athletes.

The backlash has been strong, and most recently, a USA Swimming official named Cynthia Millen resigned after 30 years on the job in protest of Thomas’ participation on the Penn women’s team.

Since her resignation, Millen has continuously spoken out against Thomas, misgendering her at every opportunity and claiming she will somehow be the end of women’s swimming as we know it.

“I told my fellow officials that I can no longer participate in a sport which allows biological men to compete against women,” Millen wrote in her resignation letter. “Everything fair about swimming is being destroyed.”

Last week, Millen appeared on Fox News to double down on her position and declared, “Bodies swim against bodies. Gender identities don’t swim. Lia is a man who is swimming against women.”

Cynthia Millen, a USA Swimming Official who resigned days ago, speaks out against biological males competing in women's sports:

And Millen’s crusade continues. She appeared on Fox News yet again this week to emphasize her anti-trans beliefs.

“The statement for women then is you don’t matter, what you do is not important and little girls are going to be thrown under the bus by all of this.” She added that Thomas is “destroying women’s swimming.”

This year, trans women and girls have faced relentless personal and legislative attacks regarding their right to participate on women’s sports teams.

Dozens of states, including Pennsylvania, have considered bills that attack transgender girls in sports, but the Biden administration has condemned the bills as illegal.

In March, White House Press Secretary Jen Psaki was asked about Biden’s views on the bills, and she brought up Biden’s executive order that he signed on his first day in office. The order said that federal civil rights legislation that bans discrimination on the basis of sex also bans anti-LGBTQ discrimination.

“The anti-discrimination executive order that the president signed is focused on children being able to learn without worrying about whether they will be discriminated against,” she said, “and this means not being denied access to the restroom, the locker room, or school sports.”

The Austin, Texas native is only the second out trans woman to compete in NCAA women’s swimming, according to Outsports. Before transitioning, she was already a well-accomplished swimmer.

“I just don’t engage with it,” she said in an interview with SwimSwam earlier this month regarding the backlash to her inclusion. “It’s not healthy for me to read it and engage with it at all, and so I don’t, and that’s all I’ll say on that.”

She added that she is proud of what she’s accomplished.