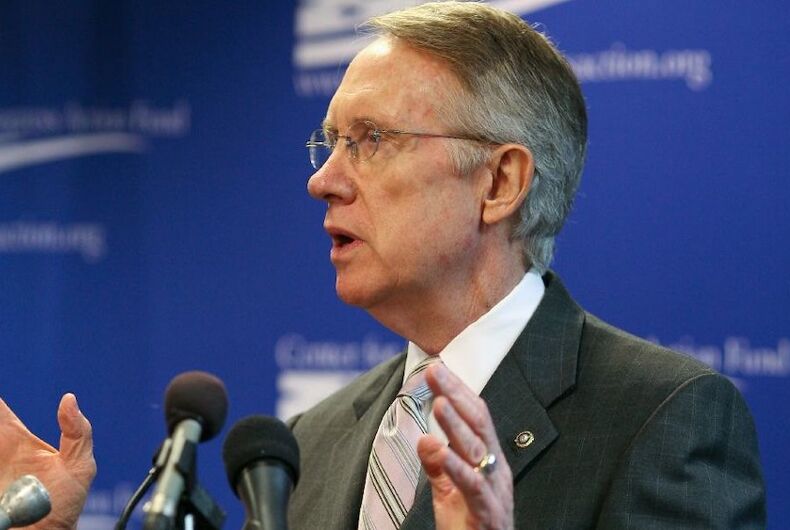 Harry Reid has died at age 82. His name was hardly a well-known outside of political circles. But as the Senate Majority Leader during the Obama era, the Nevada Democrat was responsible for shepherding through some of the administration’s signature accomplishments.

He was also one of the first Democrats to see Barack Obama as a potential president and lent him support early in his candidacy. Obama himself recently acknowledged that he wouldn’t have been elected if it wasn’t for Reid.

Reid knew how to flex his political power, and he was more than willing to do so for LGBTQ rights. He deftly navigated around the complicated political shoals to repeal the anti-LGBTQ military ban known as “Don’t Ask, Don’t Tell” (DADT).

In a moment that highlighted the personal stakes involved for many LGBTQ personnel, Lt. Dan Choi, an Iraq war veteran discharged under DADT, gave Reid his West Point ring with the agreement that it would be returned after the ban on LGBTQ service members was repealed. Reid promised that he would ensure the repeal and, after the repeal, he invited Choi back to his office where he returned the ring.

Reid also did his best to ensure passage of the Employment Nondiscrimination Act (ENDA), which would have provided federal legal protections on the basis of sexual orientation. Reid clearly did some arm-twisting behind the scenes to bring recalcitrant Democrats into line and made himself the 50th co-sponsor of the measure. (The measure made it out of the Senate, but died in the GOP-controlled House.)

Faced with an increasingly obstructionist GOP, Reid often used his political muscle to push the Democratic agenda. When Republicans blocked a vote on Obama’s federal judicial nominees, including an openly gay nominee, Reid simply forced the vote. He eventually tired of the Republicans’ efforts to stop everything by invoking threat of a filbuster, Reid nuked the filibuster for federal judicial nominees.

Reid’s unabashedly liberal viewpoint seemed at odds with his Mormon background. Yet he adapted to the changing politics in his state, while maintaining his faith.

Perhaps as much as his faith, what marked Reid most was his pugnaciousness. As a young man, he was a middleweight boxer, and he never lost that sense of willingness to metaphorically bloody noses. He was especially harsh on fellow Mormon Mitt Romney during the 2012 presidential campaign, claiming that Romney hadn’t paid taxes for 10 years. The charge wasn’t true, but Reid refused to apologize for it.

Reid retired in 2017, but he still weighed in on politics. In 2019, he called for the elimination of the filibuster altogether, claiming it was thwarting the will of the people.

Some pundits claimed that Reid’s take-n0-hostages attitude contributed to the polarization in the Senate today, but a more accurate interpretation was that Reid recognized Republicans had no intention of collaborating. Under those circumstances, he was willing to go it alone.

The result was landmark legislation that will benefit the country for decades to come.