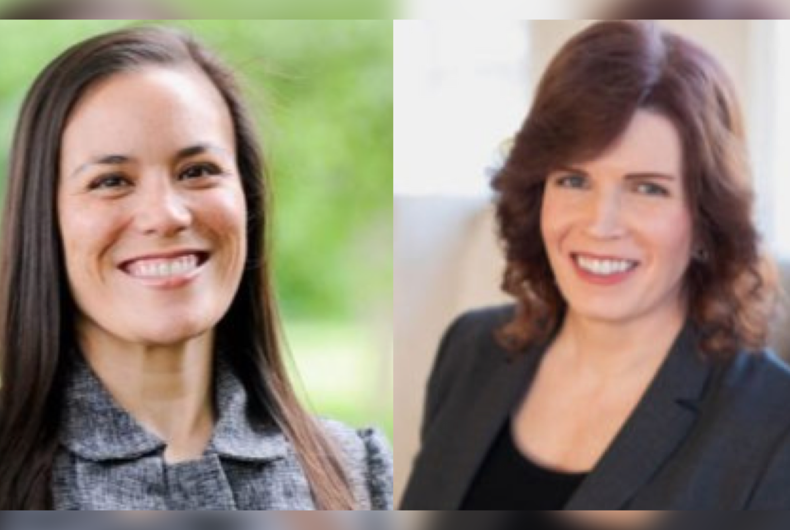 Two appointees of President Joe Biden’s were confirmed by the Senate on July 22 and will soon take their respective posts in the Department of Defense (DoD).

Shawn Skelly, appointed to become the Assistant Secretary for Readiness, is the second out transgender person ever confirmed by the Senate after Dr. Rachel Levine in March. Gina Ortiz Jones, an out lesbian and Iraq War veteran who ran for Congress twice, will become the first woman of color to serve as the Under Secretary of the Air Force.

Both were confirmed by unanimous consent.

Skelly is a retired Navy Lieutenant Commander and former Director of the Executive Secretariat in the Department of Transportation under the Obama administration. She also was a former special assistant to the Undersecretary of Defense for Acquisition, Technology, and Logistics.

After serving in the Department of Transportation, Skelly was appointed to the National Commission on Military, National, and Public Service — which reviewed and considered changes to the Selective Service agency — at the end of Obama’s last term. She was the first trans veteran to receive a presidential appointment.

She served in the U.S. Navy for 20 years and earned a master’s degree from the U.S. Naval College. She is a co-founder of the non-profit affinity group Out in National Security and works at national security technology company CACI International. In November, she was named as a member of then President-elect Biden’s Defense Department transition team.

Skelly’s confirmation makes her the highest ranking trans person in the Pentagon, according to the Washington Post. Her nomination was announced alongside Sue Fulton’s in April. Fulton is still waiting for the Senate to begin the confirmation process before voting on whether or not she will become the Assistant Secretary for Manpower and Reserve Affairs in the DoD.

For the 2nd time in history, the U.S. Senate confirmed an openly transgender person as a presidential appointee — and did so without controversy by unanimous consent.

Shawn Skelly confirmed just moments ago as assistant secretary of defense for readiness.

Jones ran for Congress in both 2018 and 2020, narrowly losing both times in an effort to represent Texas’s 23rd district, a mostly rural area that encompasses parts of San Antonio, along with 800 miles of U.S./Mexico border communities.

A first generation American, she grew up in San Antonio and Jones’s mother is from the Philippines. She raised Jones and her sister as a single mother. They lived in subsidized housing and relied on reduced lunch programs.

Jones went and served under the military’s Don’t Ask Don’t Tell policy. In the Air Force, she served as an intelligence officer. She has spent almost fifteen years working in national security, including serving as the Director for Investment at the Office of the U.S. Trade Representative under President Barack Obama.

“I’ve seen firsthand the importance of American leadership,” she told LGBTQ Nation in an interview last year. “I know how important our example is in so many ways, and frankly as we as a country are grappling with the effects of the coronavirus, it’s also a reminder of the importance of electing good, competent people that can lead in times of crisis and not cause them or exacerbate them.”

The Senate confirmed by unanimous consent Gina Ortiz Jones to be undersecretary of the Air Force. Jones twice ran for #TX23 in 2018 and 2020

Huge congratulations to one of our Texas treasures, @GinaOrtizJones, who will now serve as Under Secretary of the Air Forces 🇺🇸🛫 https://t.co/XS3EiUw5L4

Ortiz Jones was an Air Force intelligence officer and the Democratic nominee in #tx23 against Will Hurd in 2018 and Tony Gonzales in 2020.

Congratulations to Texas Democrat @GinaOrtizJones on being confirmed to serve as Under Secretary of the U.S. Air Force! pic.twitter.com/iGmtWK8XLZ

The Victory Institute, which runs the Presidential Appointments Initiative to support LGBTQ candidates for appointments in Presidential administrations, congratulated both officials on their confirmation.

“Gina and Shawn served their country when living openly could result in discharge and a lost career, so their ascension to key leadership positions is a powerful moment for those servicemembers who served or continue to serve in silence,” Annise Parker, President of the Victory Institute, said in the statement.

“Their confirmation will transform perceptions of LGBTQ people within the ranks of the U.S. military, but also among the leaders of militaries we work with around the world.”

Ruben Gonzales, the Victory Institute’s Executive Director, stated, “The Biden team is building the most LGBTQ-inclusive administration in U.S. history and the impact it will have on policies and legislation is enormous. Gina and Shawn will join at least a dozen other out Defense Department appointees who understand the challenges LGBTQ servicemembers face and will make their well-being a priority.

“Our military, like our government, is strongest when it reflects the diversity of the people it serves and ensures all are treated with dignity and respect. Gina and Shawn are shattering lavender ceilings that will encourage more LGBTQ people to consider public service.”

We congratulate @ShawnGSkelly and @GinaOrtizJones on their historic confirmations today. We are grateful for their leadership, their visibility and their continued service to our nation.

Gina Ortiz Jones, confirmed for Under Secretary of the Air Force, will be the first out lesbian to serve as under secretary of a military branch.

Shawn Skelly, confirmed for Assistant Secretary of Defense for Readiness, will be the highest-ranking out trans defense official in American history.

🔘 Gina Ortiz Jones as Under Secretary of the Air Force, the first out lesbian to serve in the role