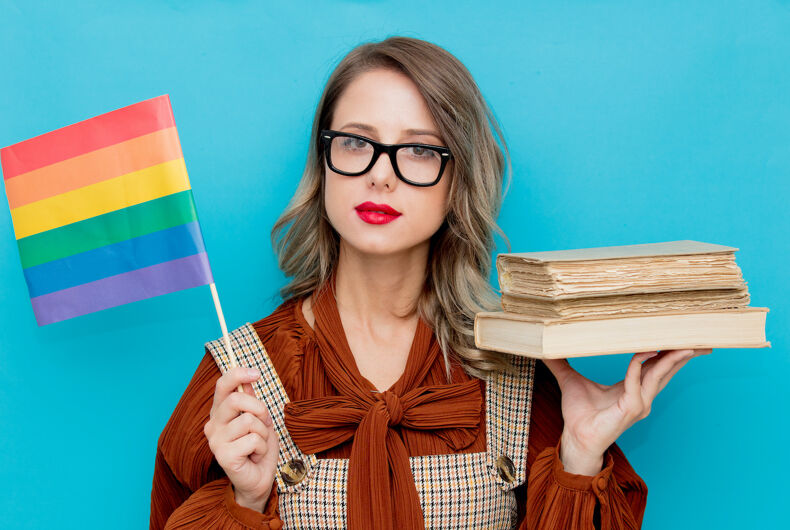 Two California teachers led a closed-door discussion at a teacher’s conference on how to start gay-straight student alliances (GSAs) in conservative school districts. Now, they’re facing threats and fighting to keep their jobs after details of the talk were leaked to and broadcasted by a transphobic author.

Lori Caldeira and Kelly Baraki, two award-winning Salinas Valley middle school teachers, gave the talk to 40 teachers while attending the California Teachers Association’s annual LGBTQ+ Issues Conference. They asked the attendees not to record the discussion, but someone did anyway.

Related: Enraged parents accuse teacher of being a “predator” after she starts Gay-Straight Alliance

The audio eventually leaked to Abigail Shrier, the transphobic author of the 2020 book Irreversible Damage: The Transgender Craze Seducing Our Daughters.

In the article, Shrier mentions that Caldeira said she didn’t keep names of her GSAs attendees to help protect the children’s identities from potentially disapproving and anti-LGBTQ parents. Baraki also said that she and her students call the GSA “the Equity Club” and the “You be You” (UBU) club to help avoid any stigma that a more explicitly LGBTQ name might attract.

Shrier also details how the teachers said they used their abilities to monitor student web searches in order to invite students who might have questions about their gender or sexual identities.

Shrier’s article went viral on conservative social media. Four days after she published it, readers complained to the school district, and the district placed the teachers on administrative leave, also opening an investigation into their actions. The Spreckels Union School District also suspended the teachers’ GSA.

Caldeira and Baraki, said that their school principal knew about the GSA and its purpose—the principal even attended some of the meetings. California law doesn’t prevent teachers from approaching students about joining GSAs, and state law bars teachers from discussing students’ LGBTQ identities with parents without the child’s permission.

Though monitoring students’ search terms is controversial, it’s a technical feature widely available to teachers, especially as virtual and online learning increased during the pandemic.

In short, everything the teachers did is legal. But the district bowed to conservative pressure and is now holding school board meetings with angry parents who have accused the teachers of “grooming” kids and hiding important details from parents.

It’s unclear how long the investigation into the teachers’ actions will take. Meanwhile, Caldeira and Baraki have said they’ve received threats and are afraid to leave their homes in fear of being attacked.

“I know the value and the importance of these clubs to students who really have nowhere else to go as far as acceptance of who they are, or maybe they’re afraid,” Jacob Agamao, LGBTQ+ services coordinator at the Epicenter, a Salinas-based youth resource program, told The San Francisco Chronicle.