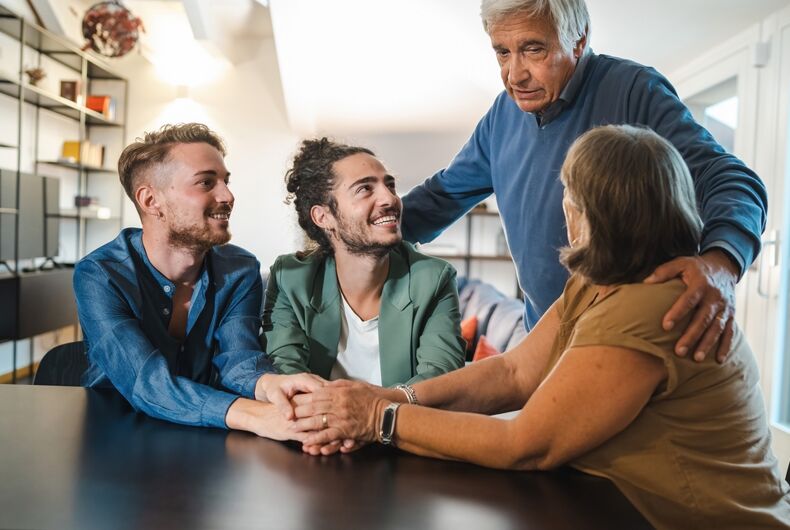 A group that originated on TikTok is helping LGBTQ people find chosen families and connection.

“TikTok Stand In Families,” now a group on Facebook, is made up of over 30 thousand members and offers a network of parents who are willing to stand in for LGBTQ people at weddings and other life events when their actual parents refuse.

Related: How to find the Island of Misfit Toys

The group was co-founded by Tennessee dad Daniel Blevins after he posted a viral TikTok video offering to attend the LGBTQ weddings of those whose parents don’t support them. In the video, Blevins said that if he couldn’t make it to an event, he would connect them with friends of his that would.

Blevins was inspired by the nonprofit, Free Mom Hugs, founded by Sara Cunningham, who went viral in 2018 for tweeting that she would happily be a stand in mom at any LGBTQ wedding.

The video became so popular that Blevins decided to launch the Facebook group with his friend Rae Otto.

The group has exploded into a place where LGBTQ people can find all kinds of support, not only stand-in parents, USA Today reported. When a trans man posted that he and his girlfriend needed a place to shower because they were living in their car, group member John Wyatt – the father of a gay son – and his wife Janell not only found them a hotel room, but also purchased dog food, gas, and a gift card for them.

Those who have met in the group have shared not only weddings together, but holidays. Some members have even stood by others’ sides at funerals.

Even co-founder Otto has found family through it.

“I went out to Atlanta this year to go visit somebody who I consider my chosen mother and spent the week with her… and Dan [Blevins], he’s my chosen brother. I consider him blood,” Otto said.

The group is also a place where LGBTQ people and allies can go for advice. A mother of transitioning twins, for example, turned to “TikTok Stand In Families” for advice on where to buy chest binders.

“I’m not an emotional person,” Otto said, “but for me, it’s been emotional.”