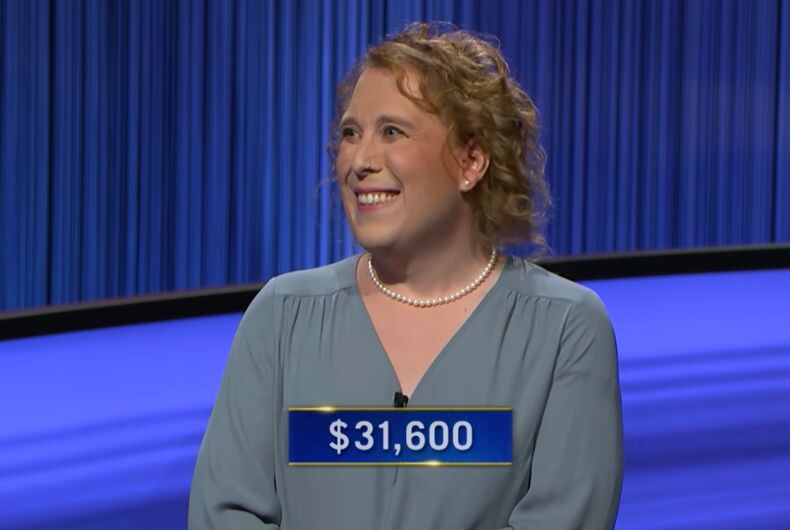 Trans Jeopardy! champ Amy Schneider had a word for transphobic Twitter trolls who have tried to dull her shine after she became the winningest female Jeopardy! contestant of all time.

Related: This out Jeopardy contestant won almost $100k. And our hearts.

Her whip-smart retort to her haters illustrates also why she’s become such a fan favorite.

“I’d like to thank all the people who have taken the time, during this busy holiday season, to reach out and explain to me that, actually, I’m a man,” she wrote on December 31. “Every single one of you is the first person ever to make that very clever point, which had never once before crossed my mind.”

I’d like to thank all the people who have taken the time, during this busy holiday season, to reach out and explain to me that, actually, I’m a man. Every single one of you is the first person ever to make that very clever point, which had never once before crossed my mind 🙏

Naturally, she was being sarcastic.

Being a highly visible trans person on national television and the first out trans contestant ever to qualify for Jeopardy!’s Tournament of Champions, has brought transphobic trolls out of the woodwork. But Schneider is too smart to let their hate distract her.

On December 30, she racked up her 22nd win. She beat the previous all-time highest record for consecutive wins by a female contestant set in 2014 by Julia Collins with 20 wins. Schneider has also won $831,600 to date, beating the womens’ record set by Larissa Kelly, who won $655,930 in regular-season play and Jeopardy! tournament appearances.

This makes her the most winning female contestant ever to play on Jeopardy!

“I genuinely couldn’t believe it,” Schneider wrote on Twitter after her first win. “After 30+ years of watching, and 10+ years of trying to get on, I’d actually won Jeopardy!”

However, Schneider is still many victories away from breaking the second-place record for most consecutive wins of any player, regardless of gender. Matt Amodio set that record with 38 consecutive victories in 2021. The first-place record was set by Ken Jennings’ 74-win streak in 2004.