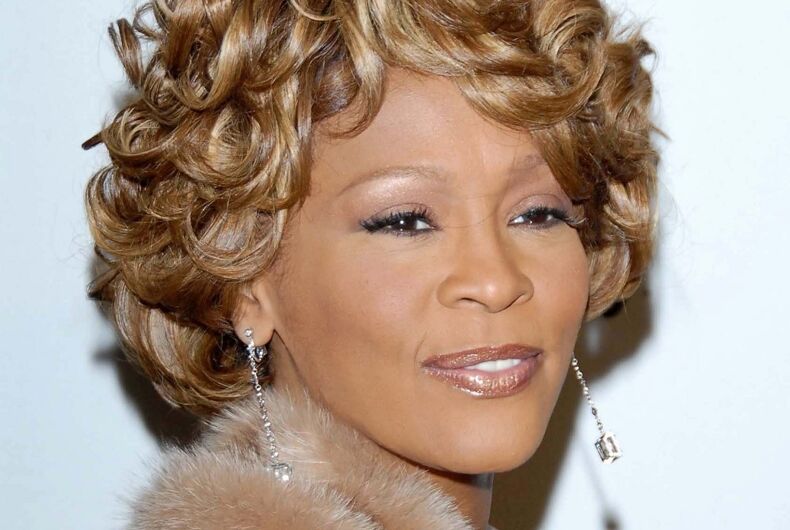 After pop legend Whitney Houston died tragically in 2012, revelations began to surface that she was bisexual, and that being in the closet actually contributed to her death.

The official cause of death according to the toxicology results revealed Houston drowned in the bathtub due to drug intoxication. While family, friends, and fans blamed Whitney’s colossal downfall on drugs and bad boy husband Bobby Brown, many believe both functioned to mask her sexuality.

Related: Whitney Houston comes out after her death. Again.

In 2019,  a moving memoir, A Song for You: My Life with Whitney Houston, by Robyn Crawford, revealed Crawford and Houston’s friendship and love story, and now, a new biography is also telling that story.

An excerpt released in Vanity Fair from Gerrick Kennedy’s Didn’t We Almost Have It All: In Defense of Whitney Houston details how Houston and Crawford first fell in love, the magical summer they spent wrapped in each other’s arms, and how the homophobic world made it all fall apart.

The pair met in the summer of 1980 while they were both working as youth counselors at the East Orange Community Development Center. Houston was 17 and Crawford was 19.

They connected immediately and were inseparable all summer. Crawford, it seemed, gave Houston somewhere to belong.

“Whitney… was grateful to ﬁnally have a close friend in her life,” Kennedy wrote. “For years she lacked true companionship outside of her brothers. The Black girls in her neighborhood bullied her for being prissy and neat, the way her mother implored her to be, and the white girls at her private school ignored her for not being one of them.”

Crawford made Houston feel safe, like she could be completely herself. Within only a few weeks of meeting, the pair shared their first kiss.

“Their lips met, bound by all that had been unspoken between the two,” Kennedy wrote. “That first kiss was long, warm like honey, and would have led to more had Whitney not been so worried about her brothers coming home.”

They spent the entire summer inside a bubble of love, entranced by one another, and taking their relationship to new and deeper levels. They made love, lounged on the beach, and even went to their first gay club.

“They were partners in a traditional sense but never had a real conversation about labels,” Kennedy said. “’Lesbian.’ ‘Gay.’ ‘Bisexual.’ ‘Girlfriend.’ Those words didn’t ever come up. Both had been with men, and what was happening between them remained unspoken. Their affection had fully blossomed, but they hid that part of their relationship from everyone – even those who suspected something.”

Houston was never comfortable with her sexuality, and as soon as she signed her first record deal, she told Crawford they had to stop seeing each other. Houston feared that if their relationship became public, it would make her path more difficult, and as a religious person, she was terrified of going to hell.

“There was no space, period, for the sin she and Robyn were indulging in,” Kennedy wrote.

She also felt the homophobia still running rampant in the music industry would have ruined her career. So their magical time together came to an end.

She told Crawford, “You know what we shared. You know how I feel about you and we will always have that.”