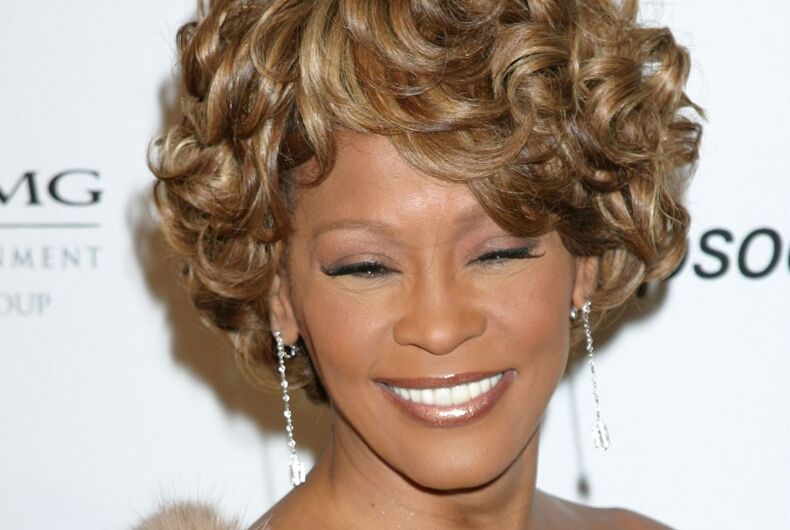 For years, rumors dogged superstar Whitney Houston as being a closeted lesbian. Now in a moving memoir, A Song for You: My Life with Whitney Houston, by Robyn Crawford depicts their friendship and love story.

Seven years after Whitney’s death, Crawford says, “I’d come to the point where I felt the need to stand up for our friendship. And I felt an urgency to stand up and share the woman behind the incredible talent.”

On February 11, 2012, Houston was found dead in the bathtub of her room in the Beverly Hilton Hotel in Beverly Hills  on the eve of the Grammy Awards. Allegations at the time surfaced that pop superstar Whitney Houston was murdered. These allegations flew counter to the Coroner’s Office report that there was no sign of foul play or trauma. The official cause of death months later, according to the toxicology results revealed Houston drowned due to drug intoxication.

While a murder investigation was ramped up in 2012 to ascertain who killed Houston, so, too, should’ve been a probe querying what really killed her before her death: homophobia.  It’s troubling, but my black community – especially Christian and churched – don’t name this killer.

While family, friends, and fans blamed Whitney’s colossal downfall on drugs and Boston’s bad boy Bobby Brown, both functioned to mask her sexuality.

In Brown’s second memoir, Every Little Step, he writes that Houston’s lesbianism was “an open secret.”

“They couldn’t let Whitney live the life she wanted to live; they insisted that she be perfect, that she be someone she wasn’t,” Brown writes. “That’s why they wanted Robyn out.”

The Daily Mail reported that Houston’s sister-in-law, Tina Brown, and her ex-bodyguard, Kevin Ammons, both believed Houston might have been a lesbian because she “had wild sex sessions with women while out of her mind on crack cocaine.”

“We never talked about labels, like lesbian or gay,” writes Crawford. “We just lived our lives and I hoped it could go on that way forever.”

Compulsory heterosexuality takes you down paths you don’t want to go. However, it was her ex-spouse Brown, who came to believe Whitney married him with an ulterior motive.

“I believe her agenda was to clean up her image, while mine was to be loved and have children. The media was accusing her of having a bisexual relationship with her assistant, Robin [sic] Crawford. Since she was the American Sweetheart and all, that didn’t go too well with her image. …In Whitney’s situation, the only solution was to get married and have kids. That would kill all speculation, whether it was true or not,” Brown stated in the 2007 tell-all book Bobby Brown: The Truth, the Whole Truth, and Nothing But….

The freest Houston may have been expressing her sexuality without being drugged out of her mind might have been in 1999 at the 13th Annual New York City Lesbian and Gay Pride Dance. Houston that year flew in for a special surprise guest appearance where she performed her then two most recent hits, “It’s Not Right, But It’s Okay,” and “Heartbreak Hotel.”

Houston’s mother Cissy, a devout Christian and homophobe, never accepted her daughter’s feelings for Crawford. In her 2103 memoir Remembering Whitney, Cissy wrote unabashedly of her disdain for Crawford.

Oprah, that same year, in an interview with Cissy asked: “Would it have bothered you if your daughter was gay?”

The homophobic constraints of career and family expectations no doubt contributed to the stressors in Whitney’s “down low” life, but so too did the church, even at her “home-going” (funeral) service.

Whitney ended her relationship with Robin immediately upon signing with Arista Records in 1982 with Clive Davis, who later came out as bisexual in 2013. Whitney gave Crawford a gift of a slate blue Bible.

“She said we shouldn’t be physical anymore,” writes Crawford, “because it would make our journey even more difficult.”

With homophobes as family friends like Pastor Donnie McClurkin, the poster boy for African American “ex-gay” ministries – self-righteously denouncing LGBTQ people – who sang at Whitney’s funeral, only a “down-low” existence was possible for her.

“I really feel that if Robyn was accepted into Whitney’s life, Whitney would still be alive today,” Brown told Us Weekly magazine.

We may never know all the demons that took this international renown pop star diva down a torturous and troubling road of self-destruction, but one demon not mentioned is homophobia.

Says Crawford: “I wanted to lift her legacy, give her respect and share the story of who she was before the fame, and in that, to embrace our friendship.”

Editor’s note: This column was updated after publication for grammar and clarity.