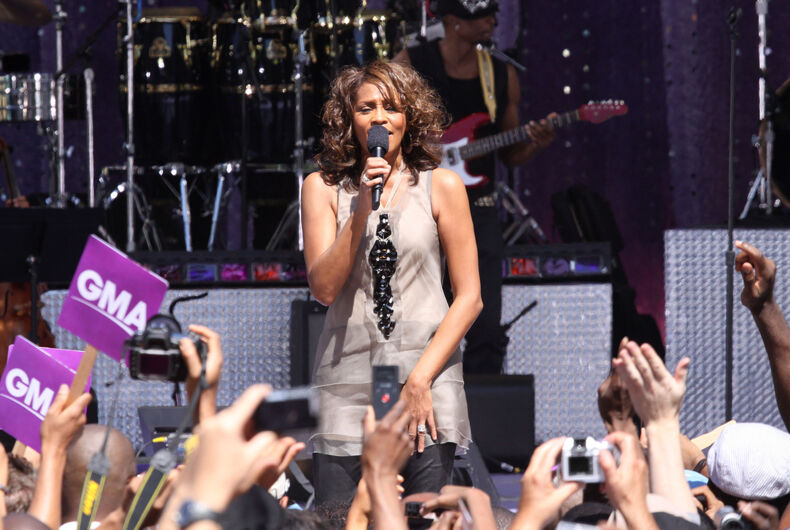 Filmmaker Kevin MacDonald’s documentary “Whitney,” now in theaters, will add to the laundry list of films about singer Whitney Houston. MacDonald’s portrait of the diva known to fans worldwide as “The Voice” is not a must-see.

The documentary does do what other biopics didn’t or couldn’t – reveal that a female family member sexually molested both Whitney and her brother.

The #MeToo movement has facilitated in breaking the long “politic of silence” that continues to dog the black community. It’s troubling, however, that homophobia does too, but my black community -especially Christian and churched – won’t name this killer.

Six years ago, Houston was found dead in the bathtub of her Beverly Hilton hotel room on the eve of the Grammy Awards.

Allegations at the time surfaced that pop superstar Whitney Houston was murdered. These allegations flew counter to the coroner’s report that there was no sign of foul play. The official cause of death according to the toxicology results revealed Houston drowned due to drug intoxication.

While a murder investigation was ramped up to ascertain if someone killed Houston, there should have been a probe querying what killed her. While family, friends, and fans blamed Whitney’s colossal downfall on drugs and bad boy husband Bobby Brown, both functioned to mask her sexuality.

Now six years since her death, curiosity about the legendary superstar Whitney Houston’s sexuality has resurfaced again with MacDonald’s documentary. I was perturbed how the narrative about her sexual fluidity suggests confusion thanks to two females in her life – a female molester and a lesbian friend.

Last year there was a blitz of materials on Houston’s life and legacy including the documentary “Whitney: Can I Be Me.”

In his memoir, Brown writes that Houston’s lesbianism was “an open secret.”

“They couldn’t let Whitney live the life she wanted to live; they insisted that she be perfect, that she be someone she wasn’t,” Mr. Brown writes. “That’s why they wanted Robyn out.”

But drugs and Brown helped Houston develop an approving black identity. What is now an adoring and all-embracing black fan base was not always the case.

In 1989, Houston was booed at the Soul Train Awards for supposedly “not being black enough.” It was at that same show that she met Bobby Brown.

“I have a theory about Whitney Houston,” said singer-actress Della Reese, a longtime Houston family friend.

“I’ve been called ‘Uncle Tom,’ and I know how that feels. I think Whitney was so hurt by being called a ‘sellout’ and ‘acting white’—and crap like that—she wanted to change her image. What better way to do that than to marry a bad boy? And the drug abuse makes her a flawed person fighting to overcome her demons. Makes her relatable.”

Houston’s personal assistant and best friend, Robyn Crawford, was rumored to have been Houston’s lesbian lover. For a while, the two women lived together.

Houston exhibiting gender non-conforming behavior was no secret to those closest to her. The Daily Mail reported that Houston’s sister-in-law, Tina Brown, and her ex-bodyguard, Kevin Ammons, both believed Houston might have been a lesbian because she “had wild sex sessions with women while out of her mind on crack cocaine.”

Brown, over time, came to believe Whitney married him with an ulterior motive.

“I believe her agenda was to clean up her image, while mine was to be loved and have children. The media was accusing her of having a bisexual relationship with her assistant, Robin [sic] Crawford. Since she was the American Sweetheart and all, that didn’t go too well with her image,” Brown penned in his 2007 tell-all book Bobby Brown: The Truth, the Whole Truth, and Nothing But…

“In Whitney’s situation, the only solution was to get married and have kids. That would kill all speculation, whether it was true or not,”

The freest Houston may have been expressing her sexuality without being drugged out of her mind might have been in 1999 at the 13th Annual New York City Lesbian and Gay Pride Dance. Houston flew in for a surprise guest appearance where she performed her two hits, “It’s Not Right, But It’s Okay,” and “Heartbreak Hotel.”

Houston’s mother, Cissy, a devout Christian and homophobe, never accepted her daughter’s feelings for Crawford. In her 2103 memoir Remembering Whitney, Cissy wrote unabashedly of her disdain for Crawford.

In an interview with Oprah, Cissy was asked, “Would it have bothered you if your daughter was gay?”

“Not at all,” Cissy replied.

The homophobic constraints of career and family expectations no doubt contributed to the stressors in Whitney’s “down low” life, but so did the church – even at her “home-going,” (funeral) service.

With homophobes as family friends like Pastor Donnie McClurkin, the poster boy for African-American “ex-gay” ministries, and gospel singers Angie and Debbie Winans, who released an anti-LGBTQ single in 1998 titled “Not Natural,” singing Whitney farewell, only a “down low” existence was possible for her.

“I really feel that if Robyn was accepted into Whitney’s life, Whitney would still be alive today,” Brown told Us Weekly magazine.

We may never know all the demons that took this internationally renowned pop star down a torturous and troubling road of self-destruction, but one demon not frequently mentioned is homophobia.