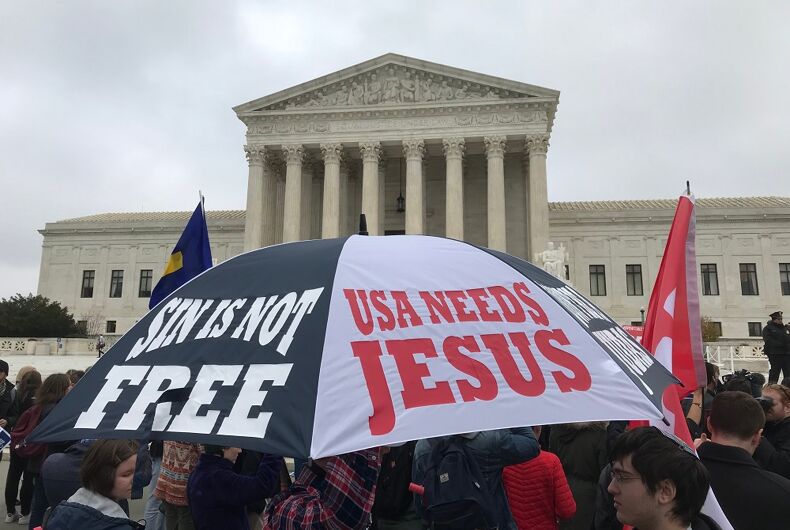 Sometimes, it is explicit – the baker refusing to bake a same-sex wedding cake.

Sometimes, it is explicit while also being a bit vague – the printing company refusing to print a college magazine that “expresses freedom of lifestyles” when the only “lifestyles” being expressed are LGBTQ.

Other times, it is crafted by menageries of right-wing lawyers utilizing legalese designed to mask its true intent in order survive judicial scrutiny.

Arguably, the only thing “new” about the religion sword is the effectiveness with which it is able to create special rights by killing equal rights.

The desire of Arthur Owens to operate his chain of health clubs pursuant to what he asserted his religion dictated led to a barrage of litigation in Minnesota in the 1980s.  Two gay men, Philip Blanding and Donald Potter, filed sexual orientation complaints under the Minneapolis Civil Rights Ordinance – in part due to “Sodomite Regulations” posted at the clubs.

That law’s LGBTQ rights provision was by then almost a decade old.  Some of Owens’s employees filed discrimination complaints – including sex and religion – under the pre-LGBTQ-inclusive provisions of the state’s civil rights law.

Owens lost all of the cases.

And they were largely forgotten until the Supreme Court made marriage equality a nationwide reality, and those who analyze the law realized that the Owens cases were the only significant ones centering on a for-profit business attempting to wield religion against employees and customers (gay and otherwise).  Might they predict how a legal world featuring Obergefell v. Hodges would handle demands for full equality?

Owens’ daughter recalled that when the litigation began, “The attorneys actually laughed, thinking there’s no way they’d lose this.”  One shouldn’t necessarily dismiss an attorney thinking that at the time as being out of touch.  Even many gays, including Randy Shilts, had branded the early rights ordinances as “toothless paper tigers.”

Some of her other thoughts on the matter are quite disturbing.  She complained about biased media coverage – but, then again, who doesn’t?

She also complained about the court decisions being “written very one-sided.”

Ironically, that sentiment could be valid for the dissent by Minnesota Supreme Court Justice C. Donald Peterson in the non-gay rights case.

His opinion acted both as born-again apologia and as a full-throated defense of Owens’s beliefs, up to and including the right to act on them in the for-profit business setting.  He noted, with approval, Owens’s policy of not hiring managers who were not born-again Christians and similarly not promoting to management status any current employee who was not.

“[R]eligion-related standards for managerial employees are the most pronounced and conspicuous of those found by the [hearing] examiner as violative of the anti-discrimination statute. Commonsense and common law, however, should make them the least subject to sanction. All employees, to a lesser or greater extent, have a fiduciary relationship to their employers, with a duty to act in the interests of the employer and not as an adversary.”

As he went further, Peterson became more blunt.  “Forbidding an employer from asking any questions related to religion or morality denies to that employer a right to important information relevant to suitability for employment.”

This was only fifteen years removed from Lou Grant overtly asking Mary Richards her religion during her job interview at fictional WJM-TV in a fictional version of Minneapolis (a version of Minneapolis in which the LGBTQ rights battles between Tim Campbell and Allan Spear and Jack Baker and Steve Endean apparently never took place, but I digress.)

Fictional Mary knew it was actually illegal even in 1970.  If real-world Peterson had had his way, it would not have been in 1985.

Incredulously, he wished the state’s legal community to not believe that he was “suggesting that nonreligious persons inevitably lack qualities of honesty or commitment to duty.”  Yet, in the same breath, he declared that “there is a substantial degree of assurance that those of genuine religious commitment will have those qualities.”

Peterson’s views have not carried the day.

Set aside for the moment inquiries into what one’s genitals might look like beneath one’s clothing.  What about employees who just don’t want to reveal their religious beliefs and positions?  One inquiry or one allegedly benign invitation to attend a religious event is more than enough to forever alter the work environment for the nonbeliever and those who have disfavored beliefs.  Once is never “inconsequential.”  Such invited employees are forced into making a decision: reveal, lie,  or stand mute, any option among the three potentially opening them up to being evaluated as either non-optimal co-workers or, more generally, anti-social.

Or, to quote Justice Peterson, lacking the “qualities of honesty or commitment to duty.”

Or, to quote Arthur Owens, “antagonistic.”

One of his daughter’s complaints about the media was that it selectively quoted him, making him “sound like he was crazy.”

It took until 1993 for LGBTQ rights to become part of state law, but there were efforts throughout the 1980s to add (trans-inclusive) sexual orientation language to the Minnesota Human Rights Act – including while the health club litigation was underway.  Owens, naturally, opposed such efforts.  On April 11, 1983, he testified against them.  An audio recording of the hearing exists and Owens’s testimony was reproduced in its entirety in context in a Twin Cities LGBTQ paper at the time.

A Jewish House member asked Owens if it was true that he would not hire non-Christians.  “No, sir, that is incorrect,” Owens said.  “We will not knowingly hire anybody that is antagonistic to the Gospel.”

Did it mean, in spite of Owens’ assertion, that Cohen was ineligible for employment by Owens?  “No sir, but if you were antagonistic to Christ as the messiah, and you openly professed this, and became a problem within our company, you could not be hired by us.”

“Jews do not believe that Christ is the messiah,” Cohen calmly and respectfully told Owens.  “I’m not antagonistic toward that belief if others hold it, but it’s not my belief.”

Owens’s retort was to tell Cohen that he did not speak for all Jews – which, empirically, could technically have been true.  But Owens added: “Many completed Jews today are professing Jesus Christ, and there is a very active movement to try to reach the Jewish community with the truth.”

As a fictional Arthur – Edens in Michael Clayton – said, “You don’t need me to tell you what that means.”

And you shouldn’t need me to tell you how close we are to high courts – including the high court – using Donald Peterson’s sentiments, if not his actual language, to side with this generation’s Arthur Owenses.

Whitney Houston comes out after her death. Again.