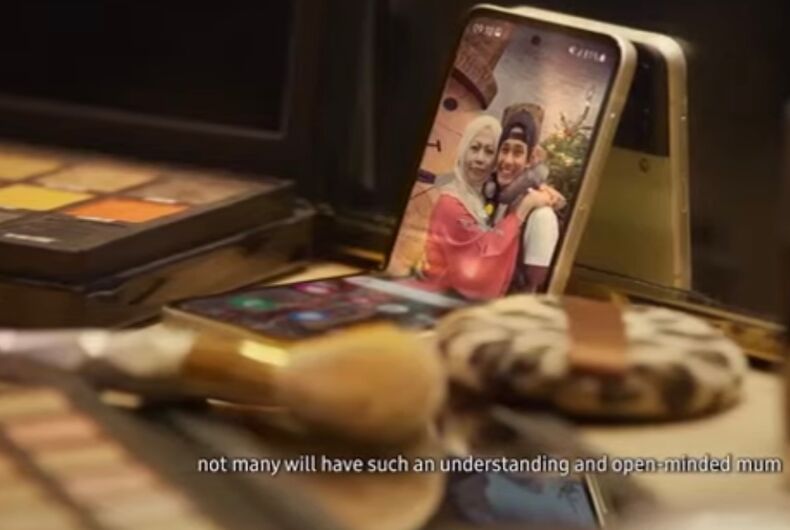 A screencapture from the ad "Listen to your Heart" by Samsung Singapore.Photo: Screenshot/YouTube

Samsung decided to remove an advertisement from airing in Singapore and deleted it from online channels, shortly after posting it, because it “may be perceived as insensitive and offensive to some members of our local community.” The full ad, just under five minutes, featured unknowing individuals — wearing Samsung headphones — hearing their loved ones read letters they wrote about them using a Samsung device.

One of the individuals featured was a Muslim woman, hearing her son read a letter thanking her for being accepting of the fact that he is a drag performer. After hearing him read it, he surprises her donning drag apparel and they embrace.

Related: Reuters’ Gina Chua is hoping to stage a future where trans people flourish in media

“You are just unbothered having people looking or judging you differently, having a son that does drag,” the woman’s son says in part of his letter.

After saying that the time she came to see him perform in drag was “the most precious and proudest moment” in his life, he concludes by writing and reading “Boy sayangkan mak,” a Singaporean phrase meaning “boy loves you,” and adding, “always.”

The ad, featuring six other individuals sharing three similarly emotional moments, with the ad ending with a quote from actor James Earl Jones in his 1993 autobiography Voices and Silences: “One of the hardest things in life is having words in your heart that you can’t utter.”

Media reports and LGBTQ activists in Singapore found some backlash that persuaded them to removing the ad, but certainly more backlash to their decision to pull it.

BBC News said that there were “several” online posts claiming the ad was “an attempt to push LGBT ideology,” citing comments under one Facebook post of part of the ad by Samsung.

“Trusted alternative news source” Wake Up Singapore, which shared a version of the ad on their TikTok channels, reports that “the Streisand effect is in full swing”: “Due to the removal of the video, people who did not even know of the existence of these advertisements learnt about the video and its subjects.”

The website claims that as of yesterday, they had “reached 80,000 users” on Instagram and “200,000 people” on Facebook about the ad’s removal, and “it is clear that the majority of people did not share the same views harboured by the conservatives that led to the removal of the videos.”

“To date, it is still unclear what these people were offended by the fact that LGBTQ+ people exist in Singapore, or that we are deserving of loving relationships, or both,” Singaporean LGBTQ non-profit Pink Dot said on social media. “We should also be able to express these loving relationships freely, regardless of those who want to shame us back into silence simply because they find us offensive.”

Hilmi, a manager at Oogachaga, another Singaporean LGBTQ non-profit, told BBC, “It was the first of its kind video coming from a minority group on a relationship between mother and son [and] was so affirming. As a queer Malay man, I am saddened to see a video that expresses unconditional love [being] taken down abruptly due to societal pressure from a group of people with conservative values.”

The drag performer featured in the ad, using the stage name Vyla Virus posted a video thanking supporters and explaining that he and his mother are okay amidst the controversy.

“I’m not going to talk about the comments that [were] said in [that video]. It was all about a mother’s love in that video, nothing else was mentioned,” he said.

Pink Dot and other pro-LGBTQ pages online have also begun reposting the advertisement as captured by ad capturing galleries, despite Samsung’s removal of it from YouTube and other sites. Wake Up Singapore’s posts on TikTok about the ad have already garnered north of 175,000 views.

“We are aware of the feedback that one of our recent campaign films for our wearable products may be perceived as insensitive and offensive to some members of our local community,” Samsung Singapore said in a Facebook post on January 19. “We acknowledge that we have fallen short in this instance, and have since removed the content from all public platforms.”

They concluded by adding, “Samsung believes that innovation and growth are driven by diversity and inclusivity. We will certainly be more mindful and thorough in considering all perspectives and viewpoints for our future marketing campaigns.” They limited comments on their post, but still received negative feedback from it.

Samsung has ran other ads with LGBTQ people, including one in 2018 featuring out Olympian Gus Kenworthy and his boyfriend. The South Korean-originating electronics corporation’s American branch was named one of the “Best Places to Work for LGBTQ Equality” by the Human Rights Campaign in its 2021 Corporate Equity Index, which the company boasts on a dedicated diversity & inclusion page on their website.

Still, LGBTQ rights are still severely limited in Singapore, especially since the Southeast Asian city-nation still considers same-sex activity between men illegal, and considered any heterosexual intercourse illegal before 2007. While not seriously enforced, the country’s Supreme Court refused to overturn laws outlawing male homosexuality in 2020, after hearing legal challenges to it behind closed doors.

Section 377A of Singapore’s penal code, inherited from laws imposed when it was a British colony, says that “any male person” who engages in “any act of gross indecency with another male person” can get up to two years in prison. Three challengers argued that Section 377A violates Article 12 of Singapore’s Constitution, which guarantees equal protection under the law and bans discrimination on certain, limited grounds.

The plaintiffs also argued that the law was “redundant” because it was rarely enforced. But the court was not convinced.

Legal gender changing is only permitted following gender-affirming surgery since 1996.

While the LGBTQ community in Singapore enjoys some visibility, media featuring LGBTQ people or pro-LGBTQ messaging faces chances of censorship. The video game Mass Effect was banned in the country after Fox News-led backlash to sexual depictions in the game, but it was later reversed and one host on the network later admitted she had never seen the game.

Pink Dot holds an annual visibility event every June which draws tens of thousands of Singaporeans. Official Pride events are not always sanctioned, and police and government agencies have regularly rejected petitions for LGBTQ gathering or events.

feeling for the mum and son in that samsung ad, they gave their voice and face and were treated as disposable once the company decided that the vulnerability they were trusted with is not as important as saving their face with conservatives.

talk of it being disrespectful to islam is so strange. islam doesn't speak, muslims speak for it, and there are a billion adherents with diverse views. what's so offensive about a mother who loves her son? is it confusing for you because your children hate you?

You know the Samsung ad about the Muslim mum and her drag queen son?

Bloody ad brought me to tears 😢. I can only imagine the fear he must've felt all his life and how relieved he was to know his mom still loved him unconditionally. A privilege a lot of 🏳️‍🌈 folks don't get.

I just watched the deleted Samsung ad that featured a mother’s love & acceptance of her drag queen son & I must say it is one of Samsung’s best ads. The ad also talks about issues like acceptance of ppl with mental illness & drug addiction. https://t.co/ABltCxYxFd

So apparently, Samsung aired an ad featuring a Muslim mum expressing support for her drag queen son and WAAPD members were so swift to act that they've already taken the ad down before anyone else could really see it 😂 pic.twitter.com/25TYVRscwO

Samsung “believes innovation and growth are driven by diversity and inclusivity” but caved in so fast before we manage to even see the video.

More evidence, if it were needed, that when push comes to shove corporations will *never* truly support queers.

yet Vyla Virus and his mother being loving in that Samsung ad, are a bad influence? Singaporeans have got their priorities twisted https://t.co/LXl0yDOHAY

See the full ad below.