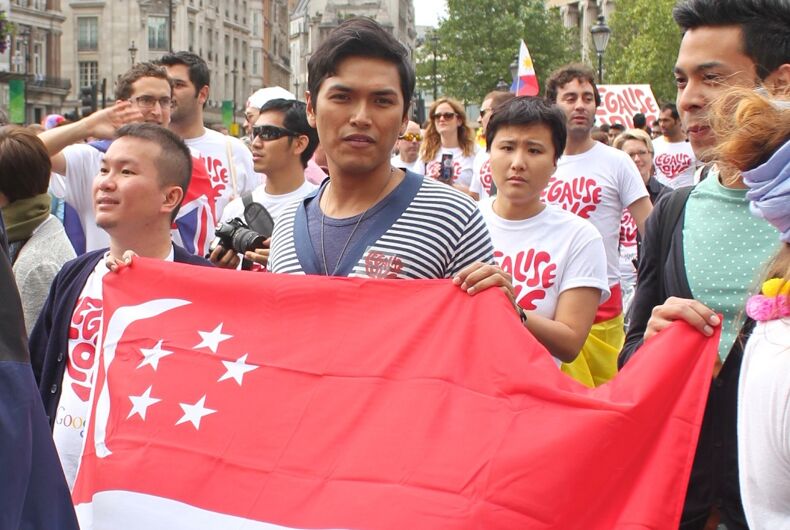 Singapore’s Supreme Court refused to overturn the country’s ban on homosexuality in a case argued behind closed doors.

Three people – a retired doctor, a DJ, and an LGBTQ activist – challenged the country’s ban on male homosexuality, saying that it violated provisions in Singapore’s Constitution that protect equal rights. The court was not swayed.

Section 377A of Singapore’s penal code says that “any male person” who engages in “any act of gross indecency with another male person” can get up to two years in prison. The law is rarely enforced and some LGBTQ events can take place in Singapore.

The challengers argued that Section 377A violates Article 12 of Singapore’s Constitution, which guarantees equal protection under the law and bans discrimination on certain, limited grounds.

But the court was not convinced.

The plaintiffs also argued that the law was “redundant” because it was rarely enforced.

Bryan Choong was one of the people who challenged the law. “My eyes are firmly on the road ahead,” he told Reuters.

“It’s shocking to the conscience and it is so arbitrary,” attorney M Ravi, who represented one of the challengers, told The Guardian. “It is so discriminatory, this legislation.”

“In declining to strike out this archaic and discriminatory law, the court has reaffirmed that all gay men in Singapore are effectively un-apprehended criminals,” said Téa Braun of the Human Dignity Trust in a statement.

The Supreme Court rejected a challenge to the law in 2014, when it said that the “supposed immutability” of sexual orientation had not been proved.

Singapore is a diverse 280 square-mile city-state of around 5.6 million people. Large portions of the population are Buddhist, Christian, nonreligious, Muslim, and Taoist.

But Prime Minister Lee Hsien Loong has said in the past that Singapore “is not that liberal on” LGBTQ equality.