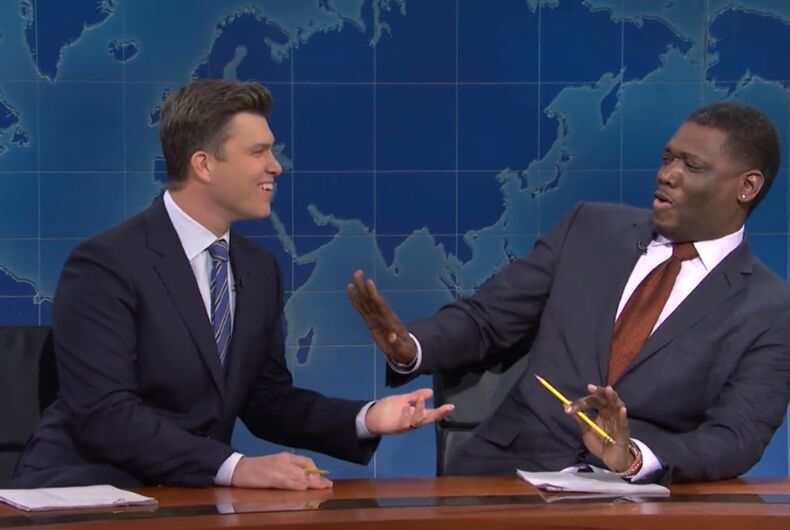 But even when Jost gives in and goes in to kiss co-host Michael Che, he’s slammed again: “Breaking news, queerbaiting Update anchor Colin Jost pretends to be gay for laughs!”

Sherman, a Long Island-originating comedian also known as “Sarah Squirm,” initially appeared on the segment to talk about how to stay warm during the winter. Instead, she went off topic and instead slammed Jost for trying to police her body hair, sexually harassing her, and refusing to give her money to donate to charity.

When Jost says Sherman’s remarks are “disgusting,” Sherman shoots back: “You know what’s disgusting, the cost of housing in New York, Colin! Yeah! Can you believe I have to pay $200 a month?”

Jost asks what Sherman wants from him, she responds, “Six thousand dollars.”

When he refuses, Sherman reads “other news” revealing that “Wealth-Hoarding Hollywood Husband Colin Jost has not a dime to spare for SNL‘s underpaid rookie, even though she was going to donate that money to St. Jude’s Hospital.”

Then, Sherman goes to “another thing” she wants to slam Jost for: his relationship with Michael Che: “It’s always ‘will they, won’t they’ with you two! Right? Why don’t you just get it over with and make out already?”

Jost protests amidst cheering from the audience, saying, “I’m not kissing Che.”

“Wrong answer!” Sherman hits back, then going to news “just in” to “Update,” revealing Jost “rejects queer love,” next to a graphic of him waving a burning Pride flag.

“You are so small minded, Colin,” Che chides him.

That’s when Jost offers to kiss Che, but it’s Che that rejects him. Then the queerbaiting allegations are dropped. (Queerbaiting is best defined as someone feigning interest in same-sex romances to capitalize on both a lack of representation of, and a growing support for, LGBTQ people — especially in media.)

“Damn, Colin, you are the worst,” Che concludes.

“I want you guys to kiss!” Sherman proclaims before exiting the stage.

Forte and Wiig, who pioneered the sketch “MacGruber” on the show, reprised the sketch that has since become the basis for multiple films and is now a TV series on Peacock. Ryan Phillippe, father to out model Ava Phillippe, also guest appeared in the sketches, which mocked anti-vaxxers and QAnon followers.

Watch Sherman and Jost’s portion of “Weekend Update” below.