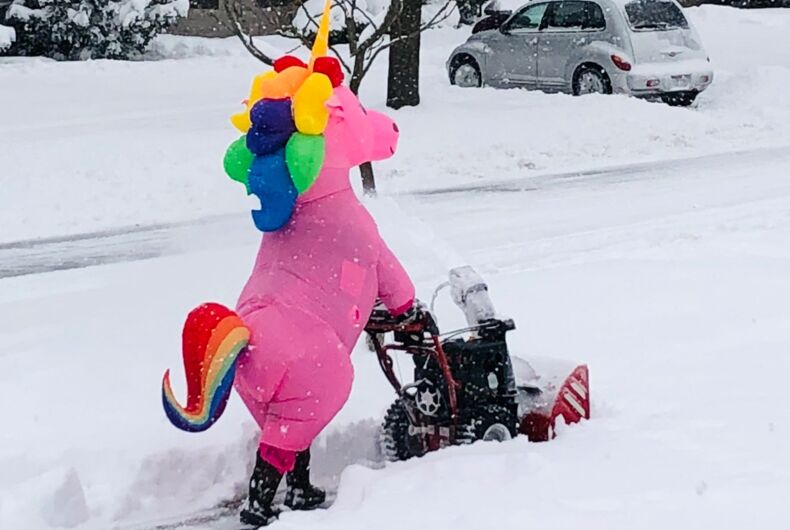 The mystery mystical creature has been helping out locals for yearsPhoto: Twitter/Doug Van Auken

A hot pink unicorn has been helping out their neighbors in Ohio during the massive snowstorms that have struck across the nation.

As the state dug out from one of the last storms, someone dressed in an inflatable unicorn costume took the time to snow-blow a long street in Lakewood and now everyone is on the hunt for the magical being.

Related: How Whitney Houston fell in love with Robyn Crawford

This isn’t the first time the mythical creature has shown up to help out residents. The last time they appeared was on Christmas Day 2020.

“Such an awesome community!!! The Wagar Ave. Unicorn was back this year and just made my night!!! My family and I loved watching him plow on by!!!” Bethany Staley posted on Facebook with photos of the rainbow festooned stranger. “Thank you, neighbor.”

“He does the entire street, which is so awesome,” Staley told local news, “and Wagar is a real long street.”

“Someone in Lakewood dons a unicorn costume while snow blowing and this is the kind of community I want,” someone posted to Twitter with a photo of the civic savior. The picture has quickly gone viral with over 42,000 retweets.

“I was actually kind of sad when it didn’t snow this year on Christmas. I thought we might see him again,” John Corlett replied to the tweet with a photo from 2020. “I remember that he even snow-blowed the driveway of someone who lived across the street.”

On Wagar Avenue in Lakewood, here he is on Christmas 2020 pic.twitter.com/lb3cOykMEv