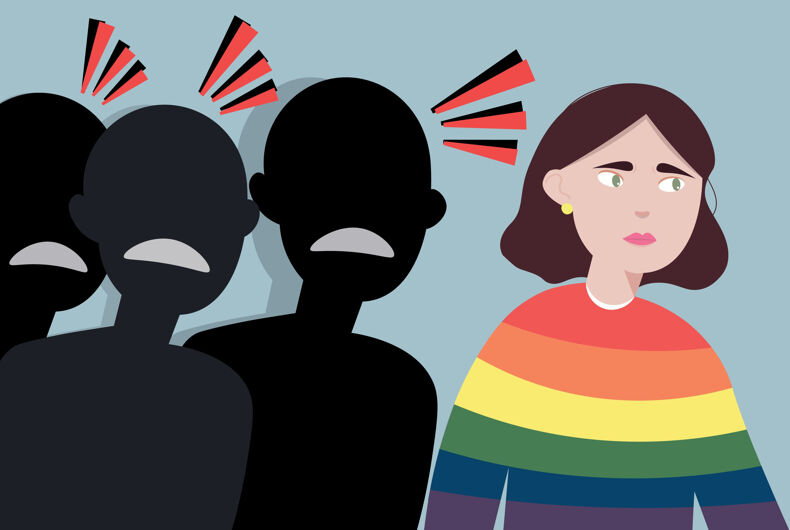 “Masc 4 masc”. “No fems”. “Discreet only”. These are phrases you’ll see a lot on hookup apps like Grindr and Scruff. And while most users will chalk it up to a matter of “preference”, some argue that this aversion to outward displays of queerness is a symptom of a much larger problem: internalized homophobia.

But what is internalized homophobia exactly? Why do queer people experience it? And how can you overcome it?

Related: Colton Underwood’s Netflix series about his coming out is being released this week

What Is Internalized Homophobia?

Internalized homophobia happens when bisexual men and women, lesbians, and gay men experience negative social attitudes and beliefs towards gay people and the gay community. In turn, they internalize those and develop feelings of self-hatred. This usually manifests as homophobic behavior towards themselves or other people in their community.

We live in a heteronormative society. Heteronormativity is the assumption that everyone is or should be heterosexual. This assumption leads to a prevailing stigma surrounding those who challenge or go against what is considered “the norm”.

As such, most of us are socialized from a young age into thinking that sexual minorities (anyone who isn’t cis or heterosexual) and anything related to them are strange, “abnormal”, or even morally wrong – and that these people should be avoided or made to feel ashamed for their same-sex attraction and sexual behavior.

Here are some of the biggest factors that contribute to internalized oppression:

Growing Up Around Homophobic Religious Conservatives

Most religious institutions condemn same-sex sexual behaviors, refuse LGBTQ people from leadership positions, and do not recognize same-sex marriage as a legitimate union. Some religious groups will also offer conversion therapy camps to those who want to rid themselves of their same-sex attractions.

However, studies have shown that not only is conversion therapy ineffective, it is also deeply harmful and can lead participants to experience psychological distress, depression, anxiety, and even suicidal tendencies. According to a study on religious affiliation and internalized homophobia in bisexuals, lesbians, and gay men, exposure to “non-affirming religion” is associated with higher internalized homophobia.

You’ll likely have heard that representation matters, whether it is an increased representation of people of color in films and television, or more positive portrayals of LGBTQ+ people in the media.

But why does representation matter? In a piece for Psychology Today, Dr. Jennifer O’Brien notes that when LGBTQ people see themselves represented in media, it can “foster a greater sense of affirmation of their identity” and can boost positive feelings of self-worth. On the other hand, when you don’t have LGBTQ role models you can look up to, or if you don’t see yourself in the media you consume, you can develop a sense that you are “invisible”, that you “don’t exist and you don’t matter”, or that there is something wrong with you.

Having A Limited Support System

Because an LGBTQ person is more likely to become a socially stigmatized person, it is important for them to have healthy relationships and support from friends and family. Without proper support, bisexual, lesbian, and gay people will have a harder time trying to overcome personal shame.

Here are some examples of how internalized homophobia can manifest in gay and bisexual men, based on the 1996 book Pink Therapy:

One commonly used scale is the IHP scale, which was developed by John Martin and Laura Dean in 1995. Here is the “Women’s Version” of the IHP:

Internalized homophobia can impact LGBTQ in a lot of different ways, which is what makes it so concerning. Here are some ways that internalized homonegativity can affect queer people:

LGBTQ youth are more likely to be bullied than straight, cisgender youth. They are also more likely to have attempted self-harm and suicide than their peers. Rates of depression, anxiety, substance abuse, and other mental health problems are also higher among gay men and women than their heterosexual peers.

According to a 2009 study, internalized heterosexism resulted in lower quality relationships among lesbian women, gay men, and bisexuals.

This stigmatization of non-heterosexual identities can be seen and felt in places where we are supposed to feel safe and accepted, from home to school to our close friend groups to the workplace. When we feel that we are unable to trust those we are close to, we can develop an inability to form and maintain lasting and healthy relationships.

STIs and HIV are among the leading health issues affecting lesbians and gay men. There is a negative stereotype that sexual minority adults like gay and bisexual men are more “promiscuous” and thus more susceptible to getting an STI.

How To Deal With Internalized Homophobia

So with all that being said, how can we combat internalized homophobia and the cultural and institutionalized heterosexism from which it stems?

According to Daniel Lyons in a piece for Psychology Today, the first step in dismantling the “deeply entrenched system homophobia” is acknowledging that everyone, regardless of race, sexual orientation, gender, or socioeconomic status, is capable of thinking or acting in a homophobic way.

Today, more and more people are challenging jokes and stereotypes about LGBTQ people, including ones that are shared by those in the community.

For example, drag queen Kim Chi performed the original song “Fat, Femme, and Asian” on the finale of her season of RuPaul’s Drag Race. The song is a biting commentary on internalized homophobia in the gay community and plays on the aforementioned “preferences” that gay men will use as an excuse for discriminating against more effeminate members of the community.

Filmmaker Jamal Lewis did the same thing, but a documentary rather than a song. Entitled No Fats, No Femmes, Lewis’ film features five black people of various backgrounds as they discuss the ways that desire among queer black people can be rooted in “problematic conceptions of different identities”.

Internalized homophobia is a systemic problem that runs deep – a symptom of the heteronormative society we live in. But it doesn’t have to keep affecting us. We just need to learn how to recognize the signs and commit to uplifting each other.