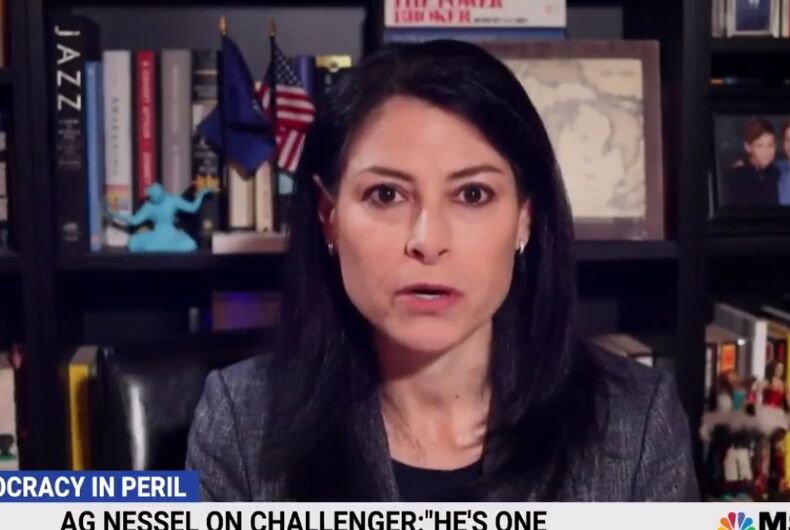 Dana Nessel, the out Attorney General of Michigan, was among several lawmakers and elected officials that spent the week marking the one-year anniversary of the riots at the U.S. Capitol warning that the insurrection attempts have not ended although the pro-Trump crowds that tried to stop the certification of Joe Biden’s election as president did not succeed.

She pledges that if her and other election officials are replaced by pro-Trump and far-right activists, that “democracy falls.”

Nessel was one of three Attorneys General to write an editorial in the conservative publication Newsweek, which has ran several opinion articles over what happened on January 6 as part of their “The Debate” series. Nessel, Nevada AG Aaron Ford, Pennsylvania AG Josh Shapiro, and Tiffany Muller, the president of the End Citizens United and Let America Vote Action Fund, wrote that “The violent attack on our Capitol on Jan. 6 was the first time since the Civil War and reconstruction that we saw our nation struggle with upholding one of the foundations of our democracy.”

“An unprecedented one in three election officials reported feeling unsafe,” they added. “In Michigan and Nevada, the Democratic and Republican secretaries of State described the graphic nature of the violent threats made against them and their families. Michigan Secretary of State Jocelyn Benson was even forced to have 24-hour police protection because of specific threats.”

Urging Congress to take action, they state, “At risk is the core of our democracy—respecting the will of the voters and having trust and faith in the system. Without that foundation, the potential for Jan. 6-style violence increases exponentially.”

Nessel issued a statement on Jan. 6th, reading, “The unprecedented attack on our democracy last year made clear that the biggest threat we face in maintaining our Constitution and all that this country stands for comes from within our own borders, fueled by seditious conspiracies and alternate realities that continue to be peddled today.”

“Some will respond to today’s anniversary by doubling down on the dangerous lies that led to the January 6 riot. Others will say we must move on as a country as if the heinous scenes we collectively witnessed never happened,” she said. “I refuse to let this day pass without recognizing the damage done and the very real threat that remains.”

The Washington Post also reported how the Republican Party has continued to push the “Big Lie” election conspiracy theories, even after seeing what happened on January 6, 2021. “Trump has pushed a majority of his party into a full embrace of his false election fraud charges, while simultaneously leading the ongoing efforts to whitewash the violence carried out that day by a pro-Trump mob,” the newspaper reports.

Nessel sternly told the Post about her Trump-endorsed opponent in the upcoming election, “There is no question that if I am replaced by Matthew DePerno, democracy falls in Michigan. Not maybe. Not possibly. Certainly. He has made it clear not only that he supports the ‘Big Lie’ — he’s one of the originators of the ‘Big Lie.’”

DePerno, who the Post notes “is widely credited for launching the audit craze among Trump supporters” because he used one quickly-corrected error in a local election count to claim “it was evidence that machines made by Dominion Voting Systems had switched votes from Trump to Biden,” did not comment. But after the story was published, he wrote in a tweet that Nessel is “afraid bc when I’m elected, she’ll go from wearing business suits to orange jumpsuits!”

Nessel responded that this was “Totally on-brand” for the Republican Party’s leading candidate, and said, “We are better than this, Michigan.”

Totally on-brand that the leading GOP contender for Michigan Attorney General has remained silent about the anniversary of 1/6 and instead is spending the day threatening to imprison me while rocking it out to Iron Maiden. We are better than this, Michigan. https://t.co/yAvHJioYZw

Michigan became one of the several states where Trump and his supporters pushed election disinformation and election conspiracy theories, although Trump would not have won reelection even if he had all of Michigan’s 16 electoral votes.

Nessel also appeared on MSNBC this weekend, discussing the attempts to replace her and other officials, which will allow Republicans to overturn elections in pro-Trump candidates’ favor.

“They purport to be law and order AGs,” says MI Attorney General @dananessel of her GOP counterparts in other states who support The Big Lie. “I don’t know how you can be a law & order Attorney General and support insurrection, sedition, cop killers.” #Velshi pic.twitter.com/P0cLZSs3qX

She has pledged that her office will continue to investigate those who push election conspiracies and attacks on democracy, but she has recused herself from overseeing investigations as to maintain her impartiality against potential opponents in the upcoming election.

“If and when it gets to a point where my staff tells me they are reviewing a case for possible prosecution, there will be an appointment of a special counsel and it will be an outside attorney,” she told Michigan Live, “But we’re not at that point yet.”

Nessel is only the second out woman to be elected a state Attorney General. Prior to winning the seat in 2018, she founded the LGBTQ advocacy group Fair Michigan. In 2014, she successfully argued a case which led to marriage equality in Michigan, later serving as part of the number of cases consolidated and upheld by the Supreme Court in their 2015 ruling on Obergefell v. Hodges.

Nessel proposed to Alanna Maguire, her co-counsel in the DeBoer v. Snyder case, on the steps of the Supreme Court after their Obergefell ruling. They married later that year and are parents to two twin sons.

Earlier this year, Nessel made waves in the queer community when she announced that she would not accept any donations from the Human Rights Campaign until President Alphonso David resigns or is fired. David allegedly leaked confidential information about a woman who accused Andrew Cuomo, the former governor of New York, of sexual harassment and assault in order to discredit her.