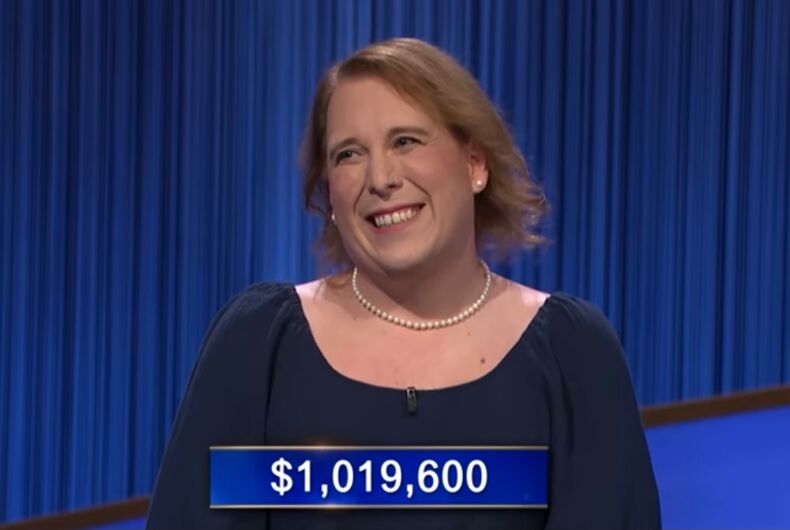 In an episode that aired on January 7th, defending champion Amy Schneider once again won the episode by finishing with a total of $42,200. That brings her total earnings from the show to more than $1 million, a mark only three other people in the show’s regular competition history have ever achieved.

“It feels amazing, it feels strange,” the out trans woman said in a statement released afterward. “It’s not a sum of money I ever anticipated would be associated with my name.”

“What a week, what a champion!” host Ken Jennings quipped at the end of the episode.

Schneider has been on the show since November 17, when she won during Trans Awareness Week, and she has proven victorious in every episode to air since, excluding the special series episodes aired throughout the last two months. Her current total is $1,019,600.

She tweeted today in her ritualistic post-game thread on the episode, “Anyway, there’s more to be said about the million-dollar mark, but I’ll get to it eventually.” She thanked her fellow contestants, Patsy and Sean, who Schneider said told her “they were just glad to be a part of history, which was sweet of them.”

Her “new quest in sight” is “catching James Holzhauer for third-longest streak all time.”

Post-game thoughts (1/7/22):
Well, I've said I usually felt good in the Friday games, and this was certainly no exception! Having seen my streak in danger the game before, I was not to be denied on this one!

It was off to share the good news with Genevieve, and then go lie down! I was exhausted, and I needed to be back in 12 hours or so, this time with a new quest in sight: catching James Holzhauer for third-longest streak all time. That quest starts tomorrow, see you then!

Schneider is now fifth in the show’s all time earnings, regular or tournament competition. She is now also fourth in the consecutive games won by any contestant, behind Jennings with 74 in 2004, Matt Amodio at 38 prior to Schneider in 2021, and Holzhauer at 32 in 2019.

Schneider made history last week, becoming the woman to win the most consecutive regular season episodes of Jeopardy! and the highest-earning woman to ever appear on the show. She is also the first out transgender contestant to make it to the Jeopardy! Tournament of Champions.

Larissa Kelly was the former top-earning female player on the show, winning $655,930 in 2008 and 2009. Schneider surpassed her total in December, making her the fourth-highest earner in the show’s history, of any gender, and leading to conservative backlash. Now, Schneider is the first woman to make it to $1 million.

Schneider also revealed that she was robbed at gun point last weekend.

“Hi All! So first, off: I’m fine,” she wrote. “But I got robbed yesterday, lost my ID, credit cards, and phone. I then couldn’t really sleep last night, and have been dragging myself around all day trying to replace everything.”

Oakland police are still investigating the robbery and have not yet made an arrest, according to the Associated Press.

A statement from Jeopardy! said the team was “deeply saddened to hear about this incident, and we reached out to Amy privately to offer our help in any capacity.”

Watch Schneider secure her victory and earnings in the latest episode’s “Final Jeopardy!” question below.