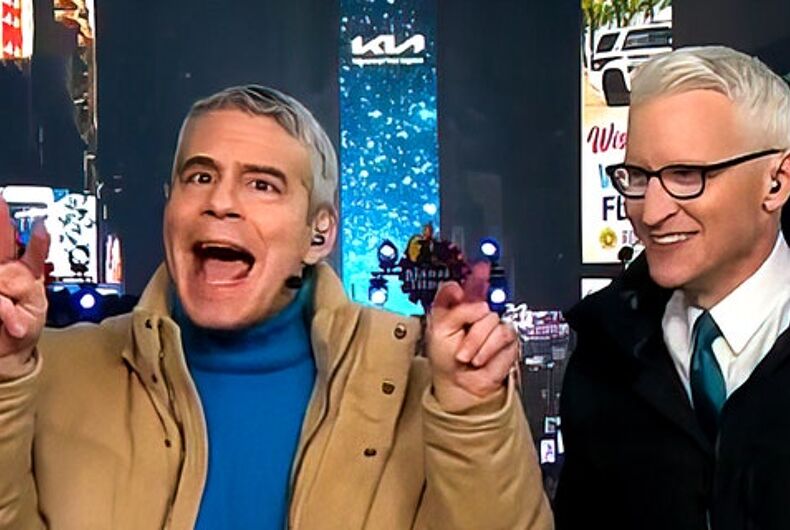 Gay talk show host Andy Cohen has said he “will not be shamed” for getting drunk and talking smack about celebrities while co-hosting CNN’s New Year’s Eve event with gay CNN anchor Anderson Cooper.

Unnamed “senior CNN staffers” reportedly told the news and media gossip website Radar that they were “embarrassed and angry” at Cohen for “making a fool” out of them.

“We claim to be the most trusted network in news and yet CNN hires Andy Cohen to make a fool out of all of us with his New Year’s performance?” one reportedly said.

Another source was quoted as saying, “Andy doesn’t even work for CNN and yet he has been the face of our network for the past 48 hours. It is embarrassing and real CNN staffers are very angry.”

Yet another claimed that “Andy went too far,” adding that he had embarrassed Cooper and that Cooper no longer wanted to co-host the event.

“He would rather ring the new year in with his son,” the anonymous source reportedly said.

Despite these reports, a spokesperson told BuzzFeed News on January 4, “I can confirm that Andy Cohen will be back to co-host NYE on CNN next year.”

Addressing Radar’s anonymous report on the Tuesday installment of The Howard Stern Show, Cohen reportedly criticized the “unnamed sources” for “making up” the story about CNN not wanting him back.

“Listen, I will not be shamed for having fun on New Year’s Eve,” he told Stern. “That’s why I’m there. That’s why they bring me there.”

He also said that viral videos of his broadcast and criticisms about his performance focused on the last 45 minutes of a four-and-a-half-hour broadcast, when he was already drunk.

During the last part of the broadcast, Cohen called outgoing New York Mayor Bill de Blasio the “crappiest” mayor ever to run the city.

He also mocked Ryan Seacrest, the host of the ABC’s competing New Year’s Eve show, which was simultaneously broadcast nearby in Times Square. He called the performers behind Seacrest a “group of losers” and called the ABC broadcast “nothing.”

Cohen expressed regret for his comments about Seacrest on SiriusXM’s Andy Cohen Live soon after.

CNN addressed the Seacrest comments by saying, “Andy said something he shouldn’t have on live TV. We’ve addressed it with him and look forward to having him back again next year.”