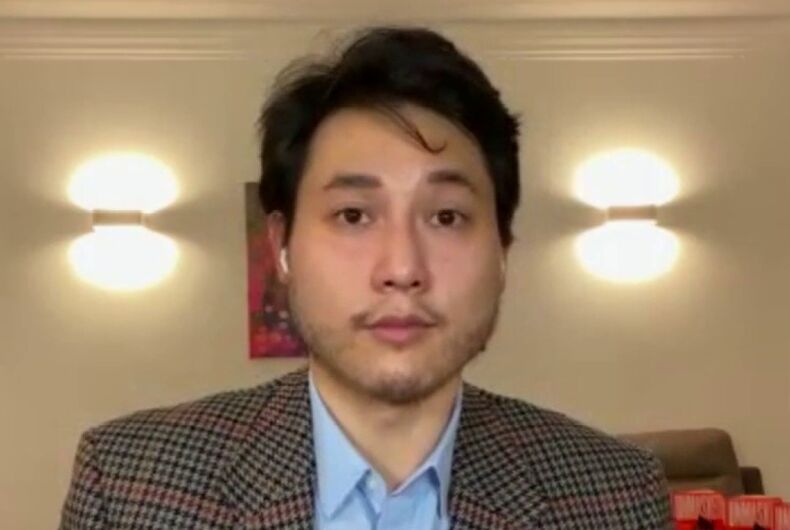 A wheelchair-using leftist activist named Dustin Brandon Ferreira has accused a gay “right-wing troll” and provocateur Andy Ngo of making him the target of conservatives on social media, resulting in violent assaults and threats against Ferreira and his family.

Ferreira told The Daily Dot that the targeting began when Ngo tweeted footage of Ferreira’s September 1, 2020 arrest by police in Portland, Oregon. Though no charges were filed, Ngo referred to Ferreira as a  “belligerent wheelchair-bound rioter.” Ngo has since reposted the mugshots from his arrests when writing about Ferreira on his Twitter account, even though no charges were filed against him.

Since then, Ferreira said that he has been “shot at, head-butted, punched, sprayed with mace, doxed, threatened, and had a loaded gun pulled on him” since Ngo began targeting him online. Whenever Ngo tweets about him, the other commenters make threatening remarks about injuring and killing him, especially focusing on his disability.

Ferreira is a 38-year-old, 4’2″, 120-pound man with severe osteogenesis imperfecta, a brittle bone disease that has caused him over 500 broken bones in his life. He doesn’t conceal his face during protests and is outspoken against Ngo.

After Ngo first tweeted about Ferreira, Ferreira said, Ngo’s right-wing followers made videos posting Ferreira’s home address. One day, right-wingers ordered food deliveries to members of Ferreira’s family across the nation and used his cell phone number to confirm the deliveries, just to demonstrate that they knew where his family members lived.

Ferreira also said right-wingers reached out “to every former employer I ever had, sent them death threats, told them they were employing an active antifa member.” He also said that someone threatened to blow up his apartment building.

While Ferreira is anti-fascist, he has said he isn’t antifa. Ngo’s labeling him as such, Ferreira said, has also resulted in Portland police attacking him, causing a broken shinbone and torn rotator cuff. Ferreira is considering pressing charges against police for the injuries.

The beef between the two men has some history.

Last summer, Ferreira wrote that he would “be lighting up a big ol’ blunt to the sound of hearing karma finally found your life.” In response, Ngo wrote on Twitter that Ferreira had said he would celebrate Ngo’s death. Ferreira told The Daily Dot that he just meant that Ngo’s right-wing alignment and activities would result in “karma” like lawsuits, public shaming, and lost sponsorships, not death.

Last January, Ferreira led a days-long protest against Ngo at a book-signing event at a Portland bookstore. During the protest, Ferreira tweeted a video of himself signing a copy of Ngo’s book inside the store. He said Ngo told his followers that he was “targeting him and said people should go report my post.” Soon after, Ferreira’s Twitter account, @2lesslegs, got permanently suspended.

Ngo is editor-at-large of the right-leaning website The Post Millennial. In the past, he has taken footage from Black Lives Matter protests to report on the supposed “antifa” organization on social media. The website’s other backers and operators aren’t publicly disclosed.

At past protests, Ngo has joined the side of QAnon believers, fundamentalist evangelical Christians, the Proud Boys, Trump supporters, and right-wing agitators.