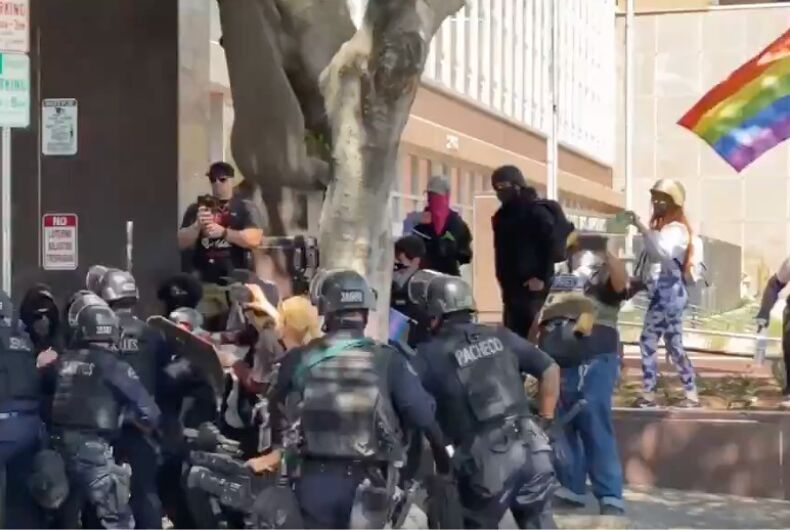 QAnon believers, trans activists, white nationalists, and Antifa clashed in a bloody riot outside a Korean spa in Los Angeles over the weekend. A viral video about a trans woman sparked the incident, but she doesn’t actually exist.

The Instagram video showed a woman complaining to staff that a transgender woman was using the facilities at Wi Spa. Customers at the family-friendly facilities are frequently undressed while bathing and soaking in the hot water.

Authorities and spa employees say that there wasn’t a trans woman in the building at the time. California public accommodations laws guarantee that transgender people have equal access to facilities.

QAnon believers quickly seized on the video of “evidence” for the conspiracy theory that Democratic politicians and celebrities belong to a pedophilic cannibal cult run by aliens. Adherents spread similar false rumors about a Washington D.C. pizza parlor, claiming the restaurant’s basement was a nexus for pedophiles.

A man was arrested after entering the restaurant, shooting a gun and demanding the release of the children. The restaurant does not have a basement, but has been continually targeted by Trump supporters.

A random transgender woman was falsely “identified” as the nonexistent spa customer. She was harassed online and got multiple death threats.

The QAnon believers were joined by fundamentalist evangelical Christians, the Proud Boys, Trump supporters, and rightwing agitators like Andy Ngo, who is gay. They faced off with anti-fascism demonstrators (like Antifa) and trans activists. Both sides clashed with the police, but officers focused on the counter-protesters and not the far-right groups.

Stun guns, knives, and mace were left behind as protestors fled the melee.

At a protest near Wilshire Bl & Rampart Bl, 2 groups clashed. Smoke bombs/projectiles were thrown at ofcrs & a dispersal order was issued. Several dozen people were arrested. Numerous items in violation of 55.07 LAMC were found discarded including a stungun, knives, pepper spray pic.twitter.com/exk7vvTfRm

Woman was just shot by a rubber bullet as she asked to please put down your guns— pic.twitter.com/YkZUjW007l

More arrests being made by LAPD— counterprotesters and NLG are in the crowd— some journalists may still be stuck in there too pic.twitter.com/ybZjISAUgy

LAPD telling the counterprotesters that it was appropriate to use a bean bag round on someone that was spraying silly string pic.twitter.com/hgHnNSO7iz

More cops pointing their beanbag shotguns at protesters— pushing some of the counterprotesters back as LAPD move forward on the crowd pic.twitter.com/WhPHRM3rTF

The knife wielding far right extremist did not only stab a fellow anti-trans demonstrator. He also stabbed a pro-LGBT+ activist in the leg, hospitalizing them.

Far right extremists brought violence to Wi Spa & THEY were the ones who used lethal force.