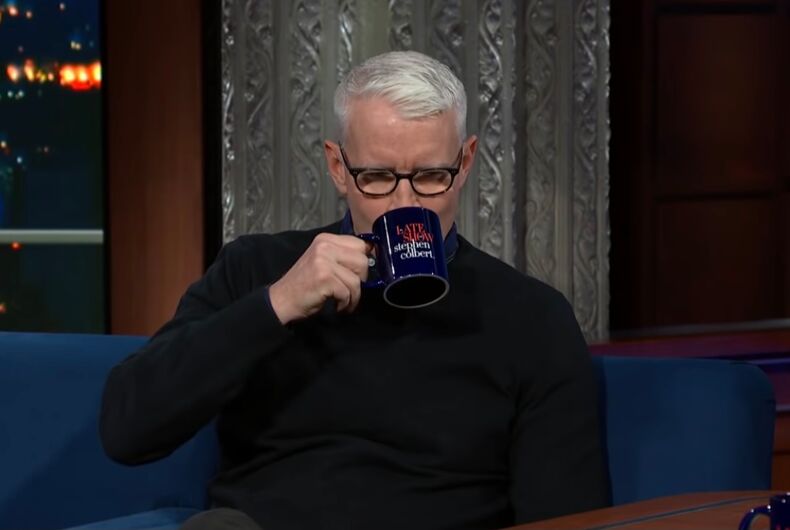 CNN anchor Anderson Cooper revealed in a recent sit-down with Stephen Colbert on The Late Show that, following the firing of his fellow CNN host Chris Cuomo, he received one call from a familiar voice: Bravo host Andy Cohen.

“The first call I got after I got the call about Chris Cuomo was Andy Cohen, like, ‘Do you think I could get that show?’” Cooper said.

Related: Time’s Up lays off nearly all of their remaining staff to undertake a “reset”

Cooper and Cohen, both of whom are out, are scheduled to host New Year’s Eve Live together on the cable news network for the fifth edition in a row.

Cuomo, who used to host the show directly following Cooper’s Anderson Cooper 360 on CNN, was fired for assisting his brother, former New York Gov. Andrew Cuomo (D), and his staff in response to accusations of sexual misconduct against Andrew. Sexual harassment allegations have since come out about Chris, too.

Colbert bought up the situation in the interview with Cooper, mentioning that Cooper is his last guest appearance for the Late Show in 2021 because he’s “such a wonderful guest.”

“I know that journalists don’t like to be the story, or at least that’s the thing you guys say, but CNN is the story in many ways right now,” Colbert said. “Chris Cuomo… was let go… I don’t want to say suddenly, but a little surprisingly… were people surprised over at the shop?”

Cooper replied, “I don’t know about surprised overall. I mean, it happened – it didn’t happen, then it did happen.”

Colbert asked if he knew before everyone else found out, and Cooper said he “absolutely” found out the same way everyone else did, from watching it on TV. He also blew off the notion that he and others would have found out prior to CNN’s announcement.

Asked how he felt about Cuomo’s situation, Cooper answered, “Look, I don’t want anything bad to happen to somebody who is a colleague and a friend of mine, and I feel terrible for him and his family. That being said, journalists have strict ethics and strict rules that we are to abide by, and if you don’t abide by them, there are repercussions.”

He concluded by saying, “I wish Chris the best, and I’m sorry how all this played out… and I hate this for his family, but… you know, it’s a business with very big responsibilities, and repercussions.”

Colbert then asked, “How’s Don Lemon, is he okay?” In reference to the out CNN anchor who hosted the show right after Cuomo’s, and co-hosted a podcast with him called The Handoff, based on their cordial interactions on-air as Cuomo signed off and Lemon signed on.

Cooper said he has “not talked” to him about it, and later said Lemon should be asked himself. Then Cooper bought up someone who he did hear from from regarding Cuomo.

In response to Cohen’s proposal, Cooper responded: “I was, like, ‘Andy, you’ve got enough real estate in television.’”

He added, “Andy feels he is fully qualified to host a presidential debate because he hosts the Housewives reunions.”

Later in the show, Cooper talked about how “unrecognizable” his 20-month old son Wyatt looked in 2020, when he was deemed People Magazine‘s “Cutest Baby Alive,” compared to now. (Cohen’s son

In line with many of his infamous moments from hosting New Year’s Eve Live, he took a shot of tequila live on air, and he used salt for the first time.

Watch part of Anderson’s sit down with Colbert below.

Out mayor Robert Garcia announces his campaign for Congress