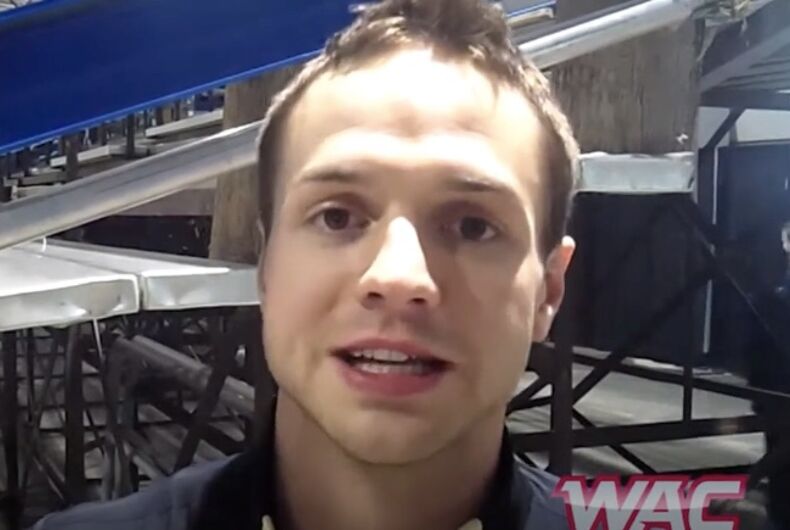 Andrew Blaser, 32, has made history as the first out gay man to win a spot representing the United States in the winter Olympic sport of skeleton. Skeleton involves a single person riding a small sled (lying face down and head-first) at quick speeds along a frozen track.

Blaser will be the only man on the U.S. skeleton team at the 2022 Winter Olympics in Beijing. He will also be part of a record number of out LGBTQ athletes competing in China, a country whose government largely opposes LGBTQ rights.

While studying at the University of Idaho, Blaser originally competed as a track-and-field athlete in pole vaulting and hurdles. He is currently ranked 28th worldwide among male skeleton athletes, but he initially hated the sport, according to the Team USA website.

He preferred bobsledding, but his coaches said his body was better suited to skeleton. The sport requires speed and slenderness, which befits his 6’4″ height and 189-pound weight.

Blaser first spoke to the media about being gay in a November 2021 interview with Outsports. However, he had previously mentioned his sexuality on his Instagram page, where he also has a rainbow flag in his profile bio and uses queer-themed hashtags.

In his interview, he mentioned that he wears fingernail polish while practicing and competing.

“When we’re going to sliding and practice, I think it’s kind of funny and it’s a little bit of shock value,” he said, “just making people turn their head and kind of catch them off guard, which is a little bit of what I do with my jewelry and even my race suit, which is snakeskin. I’m the only one who has a snakeskin print suit.”

Blaser — who also enjoys traveling, camping and singing — is likely to be one of several out male Olympians competing in 2022.