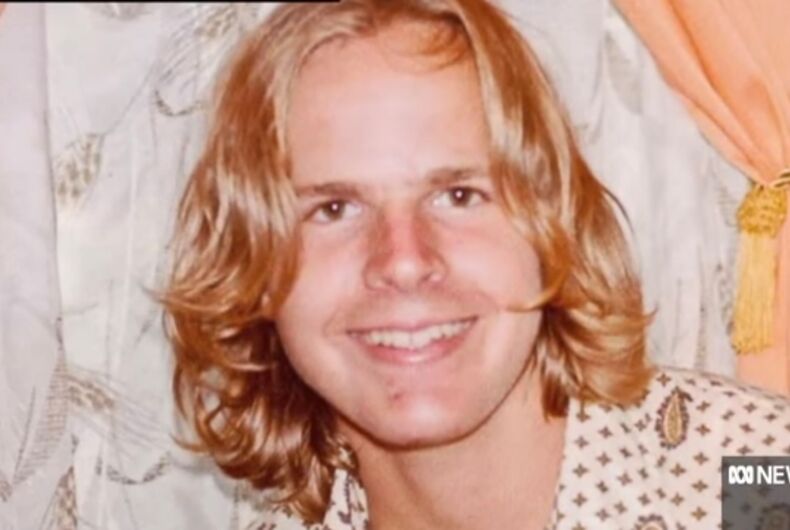 A man has pled guilty — against his lawyers’ wishes — to charges stemming from the death of a gay American man in 1988, which was initially deemed a suicide by authorities but subsequently investigated as a homicide after further inquiries.

Scott White surprised the court during pre-trial hearings this week by proclaiming his guilt in the death of Scott Johnson. After knowingly entering a guilty plea before the court, leading a court to accept it and issue a conviction.

Johnson was a 27 year-old doctoral student from California who moved to Canberra, Australia to complete his PhD studies at Australian National University, and to be with his partner, Michael Noone. Johnson was found dead at the bottom of a cliff outside of Port Jackson in Sydney, New South Wales, Australia, on December 10, 1988.

After Johnson’s clothes and belongings were found at the top of the cliff, investigators deemed his death to be a suicide and ceased investigating. It wasn’t until Scott Johnson’s brother, Steve, heard of similar deaths that befell gay men in the area that anyone began calling for further investigation, starting in 2005.

“It was inconceivable to me that Scott went somewhere and jumped off a cliff,” Steve said in a 2018 BBC interview.

With authorities unwilling to help, Steve hired a private investigator that found evidence that groups of teens would attack gay people near Port Jackson around the time of Scott Johnson’s death. Up to 80 men are believed to have been killed by anti-gay mobs in the Sydney area in the 1980s and early 1990s, the Sydney Morning-Herald reported in 2013 based on previously-unpublicized jailmate confessions, recorded on wiretaps by New South Wales police.

At least 30 of those murders were unsolved at the time, and several were known to be committed by pushing victims off of cliffs.

“The gangs would attack these cruising areas because they knew the police wouldn’t come after them. They also knew that the gay community were afraid of the police, so they wouldn’t come and report the crimes,” Steve said in 2018. “They were not private affairs done in secret, these were attacks the gangs would go into the bars afterwards and tip a few beers after bashing gays. So there may be dozens of people who may know what happened to Scott.”

Three separate coroner inquests between 2011 and 2017 found cause for police to reconsider their conclusions, with the last inquest finding that Scott Johnson likely died as the result of a hate crime. Finally, police decided to reopen their investigation, and in 2018 they offered a AUS$1 million reward for information.

“Back in the 80s — if you look at the information that came out of the inquest… we should all be embarrassed about that time,” New South Wales police commissioner Mick Fuller said at the time.

Steve matched that with his own separate reward offer in 2020.

Someone from the public stepped forward after that, and on May 12, 2020, Scott White was arrested.

White, now 50 years old, requested during a pre-trial arraignment on January 10 to change his plea to guilty, which “surprised everyone in the courtroom,” Steve said.

“The police were sure they had the right person but you’re never sure until you hear those words from the person themselves and then suddenly I know who killed my brother,” Steve said after to Australia’s ABC.

Returning to court on January 13, White’s attorneys argued before the New South Wales Supreme Court that his plea should be rejected on the basis that he wasn’t competent enough to make that decision. White undermined their argument by repeatedly yelling that he wanted to admit his guilt.

The court rejected their argument, accepted his guilty plea, and scheduled sentencing hearings on the charge of murder to be held on May 2. He faces up to life imprisonment.

“I think primarily I’m feeling relief and I am thinking about my brother and that a lot of people cared about him to bring this result today,” Steve said after. “[We’re] greatly relieved that the accused found it in his soul to confess and plead guilty and put an end to this, so I’m very happy about that.”

Police previously confirmed that an unnamed tipster would be eligible for the reward money if a conviction was secured.

As for White, Steve told reporters, “I think he deserves what he has coming to him. It’s a very sad, tragic thing that he did.”

As of 2018, about 27 similar cases of fatal violence against gay men by anti-gay mobs in the Sydney area — now known as the Gay Gangs murders — were found on review by police. In 2021, the Morning-Herald launched a podcast looking into the deaths further, named “Bondi Badlands.”