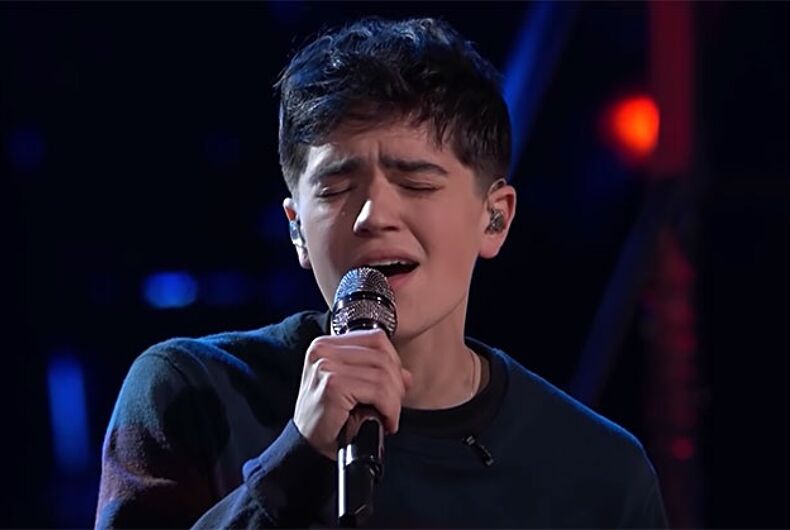 Trans singer Sasha Allen is tearing through the competition on NBC's The VoicePhoto: Screenshot

Jim and Sasha Allen, a father/son duo from Newtown, Connecticut, are tearing through the competition on the hit NBC reality show The Voice.

Only three transgender people have appeared on the show; 19-year-old Sasha is the first performer to make it to the semi-finals.

The men’s coach, LGBTQ ally Ariana Grande, has formed a tight bond with Sasha and the two have a lovefest at some point during each episode. But the young performer’s earnest attitude and ability to nail every performance are winning him fans across the country.

Allen came out as trans to the audience in the segment that aired before the two had their blind audition. A few weeks later during Fan Week, he got to find out how much his willingness to proudly display his full self had impacted viewers.

“That was a really hard decision to make because you are showing a very vulnerable part of yourself to millions and millions of people,” Sasha told Parade. “But [during fan week], seeing people’s support and responses and how that has impacted people really showed that it was worth it and the right decision even though it was a hard one to make.”

“im the third trans person to ever be on the show,” he posted on Instagram with a thirst trap photo, “& im so stoked to represent the trans community on such a huge platform. to my many young trans followers, don’t give up on the dream of loving yourself one day. you will, and there will come a time when you finally feel authentic. thank u for the love , im shirtless becuz top surgery is like 7 grand and im getting my moneys worth”

But the fans picked Creedence Clearwater Revival’s hit “Have You Ever Seen The Rain” for the duo to perform and it landed them in the bottom. In jeopardy of being voted off the show, the two sang Jason Mraz’s “I Won’t Give Up” during the elimination round. Viewers voted online to save them.

Before they found out they had been saved, Sasha spoke to Grande and trans kids around the nation from the stage.

“The greatest part of this experience has been knowing you. You have been the greatest gift of my life,” he told the pop superstar. “You are such an incredible person. I love you so much. You’ve been so impactful on me and my music and us. I treasure these moments with you.”

“To every trans kid out there who still thinks there’s no way, there’s a light at the end of the tunnel.”

This week, the two weren’t in any danger as they sailed through to the semi-finals with a strong chance of making it all the way to the end.

The Supreme Court’s eagerness to overturn Roe v. Wade is a bad sign for LGBTQ rights