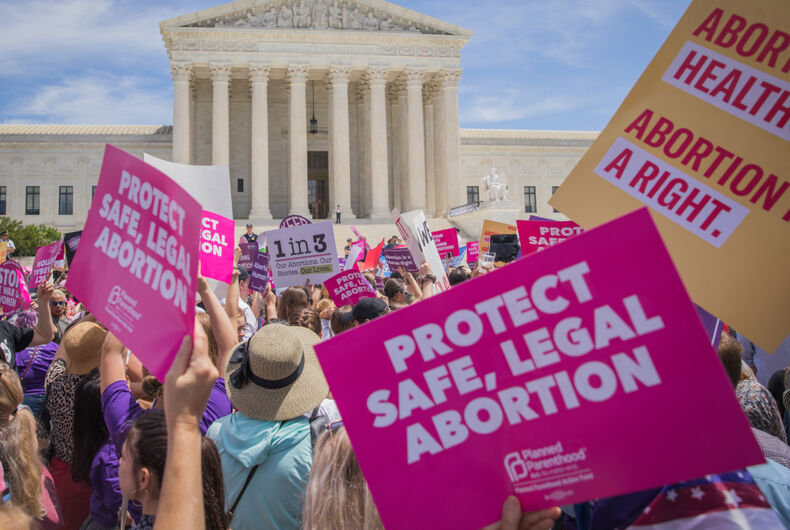 The Supreme Court heard oral arguments today in the case of a Mississippi law that would ban abortion after 15 weeks of pregnancy. Based on the questioning of the six conservative justices on the Court, the restrictive law seems likely to survive.

Indeed, it seems as if most of the six conservative justices, including the three Trump appointees, are willing to go one step further than necessary, and potentially strike down Roe v. Wade, the 1973 decision that granted women the right to abortion.

During the arguments, Justice Sonia Sotomayor drew a direct line between overturning Roe v. Wade and looking to restrict some of the rights that the Court has granted LGBTQ people. Along with abortion, the Court has used a “right to privacy” principle that it first applied in 1965. That right was the bedrock for striking down sodomy laws and paving the way for same-sex marriage.

“We have recognized that sense of privacy in people’s choices about whether to use contraception or not,” Sotomayor said. “We’ve recognized it in their right to choose who they’re going to marry.”

Ending a woman’s right to choose has long been at the top of the wish list for the religious right. Thanks to Trump weighting the Court with nominees all but guaranteed to do so, that wish now seems within reach.

Striking down a precedent on a decision that has stood (though slowly been eroded) for nearly half a century would be a major action. But the Federalist Society, the anti-LGBTQ legal group to whom Trump outsourced his judicial picks, has long made restricting abortion a requirement for the judicial choices it supports.

Overturning Roe v. Wade would have far-reaching implications for law, and for LGBTQ rights in particular. Marriage equality would rank high on the list of rights that ultra-conservatives would love to see end.

Abortion rights and LGBTQ rights are more closely linked legally than most people realize. Sharon McGowen of the LGBTQ group Lambda Legal told Bloomberg Law that the cases that led to the Court striking down sodomy laws and legalizing marriage equality “were built on the foundation of Roe and Casey and the court’s other reproductive rights cases.”

The right has already been floating the idea that the decision that legalized marriage equality, Obergefell v. Hodges, was wrongly decided. Indeed, they have at least two allies on the Court already. In a Court opinion last year, Justices Samuel Alito and Clarence Thomas said that marriage equality needs to go.

As a reminder, Chief Justice John Roberts joined Alito and Thomas in ruling against marriage equality in the original case.

Should Roe v. Wade fall, an emboldened right-wing will be happy to escalate the culture war even further. LGBTQ rights would be the obvious object of an attack.

At a minimum, the conservative majority on the Court will likely carve out exemptions to nondiscrimination protections so that people can refuse services to LGBTQ people on the grounds of “religious freedom.” That the “freedom” is the freedom to discriminate doesn’t seem to be a problem.

When Sotomayor called out the threat to LGBTQ rights during today’s arguments, she asked Mississippi Solicitor General Scott Stewart, who defended the state’s abortion law, if a ruling in the law’s favor would harm LGBTQ rights, among others. He denied it.

But the denial is worthless. The right won’t stop until it can reshape American law and culture in its own (minority) image. The legal challenge to marriage equality is bound to come. The only question is whether it can be stopped.