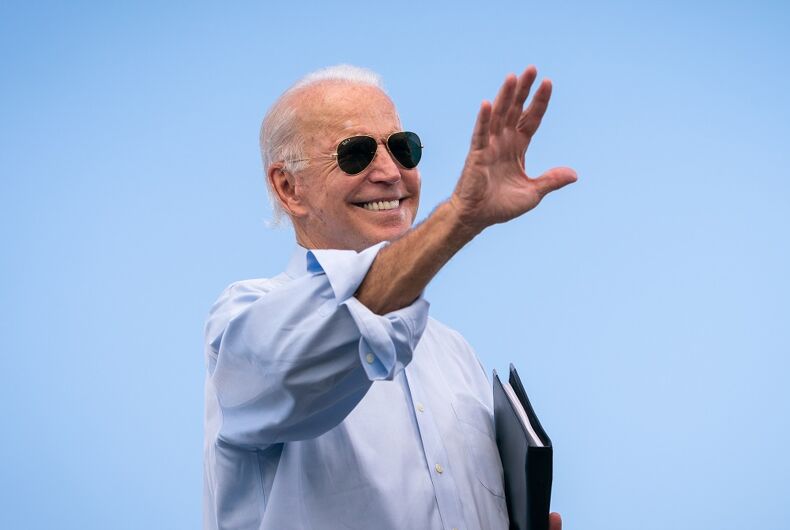 President Joe Biden had a very shady reply when asked about how Donald Trump may have put him at risk of catching COVID-19 last year.

Trump allegedly tested positive for COVID-19 just days before the first presidential debate on September 29, 2020, according to a new book from former White House Chief of Staff Mark Meadows. Instead of telling Biden’s campaign about it and postponing the debate, Meadows said Trump kept quiet and participated in the debate anyway because he had another test result that was negative.

“Mark Meadows has written a book revealing that former President Trump tested positive for COVID three days before your first debate,” a journalist asked Biden today. “Do you think the former president put you at risk?”

“I don’t think about the former president,” Biden replied before turning around and walking away.

Reporter: "Do you think the former president put you at risk?"

Biden: "I don't think about the former president." pic.twitter.com/QXCRrpnrmb

Trump announced that he had tested positive for COVID-19 on Twitter on October 2, three days after the debate. The media speculated about whether Biden, who was 77 at the time, was put at risk because Trump may have had the virus for a few days before his announcement.

Trump hosted a “super-spreader” event at the White House for Supreme Court nominee Amy Coney Barrett on September 26 where at least 11 attendees were diagnosed with coronavirus shortly after, leading to speculation that Trump caught the virus that day as well.

Meadows said in his new memoir, The Chief’s Chief, that each candidate had to provide a negative coronavirus test 72 hours before the September 29 debate. He said that Trump tested positive on September 26 after the Barrett event and found out when he was en route to a rally in Pennsylvania.

Trump suspected he had a “slight cold” as he boarded Marine One. Meadows said that as the plane was taking off, he got a call from the White House doctor.

“Stop the president from leaving,” Meadows recounted the doctor saying. “He just tested positive for COVID.”

He said he immediately told Trump, who Meadows wrote replied with something that “rhyme[d] with ‘Oh spit, you’ve gotta be trucking lidding me.'” Meadows refused to write curse words in his book because he’s Christian.

He wrote that Trump took another COVID test and got a negative result that same day and decided “to press on as if nothing had happened.” Meadows said that he instructed staff members interacting with the president “to treat him as positive” throughout the trip because of the conflicting test results.

Trump called Meadows’s claim “Fake News” in a statement. “A test revealed that I did not have COVID prior to the debate,” Trump wrote.

LGBTQ people are more likely to face sexual violence behind bars. Here’s how survivors are changing the system.