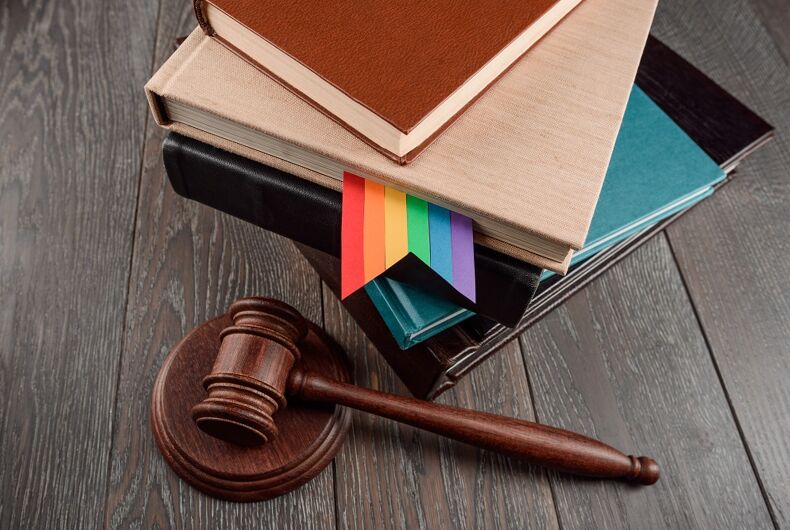 Students of an Indiana high school’s Gay-Straight Alliance group (GSA) who sued their school for the right to be treated like all other clubs were finally granted that right earlier this week.

On Wednesday, a judge issued a preliminary injunction against Pendleton Heights High School requiring that the school allow the GSA to fundraise, advertise, and be listed in the school handbook, the IndyStar reported.

Related: Conservatives blast pastor who dressed in drag to teach kids about joy

The GSA was represented by the ACLU of Indiana, who argued that the students’ First Amendment and equal protection rights were violated, as well as the Equal Access Act, a 1984 law that requires schools that receive federal funding to provide equal access to all extracurricular activities.

The law was originally pushed for by Christian activists who wanted to protect Bible study groups in schools.

Students say that they tried to restart their GSA this past year, a club that is meant to create a safe space for LGBTQ students to socialize and find emotional support. The school’s principal allowed them to meet after school but then said that they weren’t an “official” club.

“By not allowing PHGSA to advertise and attract student members the group is severely hindered in its purpose as a place of shelter, support, and education, not just for LGBTQ students, but for all Pendleton Heights High School students,” the ACLU stated in a press release in September.

Upon this preliminary victory, the ACLU hopes the ruling will show other schools that anti-LGBTQ sentiment will not be tolerated in Indiana.

“We hope that public schools throughout the state will take notice and forgo future challenges by providing equal treatment to all student groups,” the organization said in a statement to local news station WIBC.

The students’ victory comes amidst a flood of conservative attacks across the country on LGBTQ clubs and content in schools.

In Lakeland, Tennessee, for example, parents are enraged that the school board is allowing a GSA to form at a district middle school, so angry that many of them are accusing the teacher who sponsored the GSA of being a “predator.”

And in Spotsylvania County, Virginia, the school board called for the removal of books with “sexually explicit” content from school libraries with two board members even suggesting the banned books be burned, after a mother found LGBTQ content in the district’s library app.

This is not the first LGBTQ-related Pendleton High School controversy. Earlier this year, the school banned teachers from displaying Pride flags.

Principal Connie Rickett said that she wanted to make sure that the school was a “welcoming environment for all” and Pride flags will make anti-LGBTQ students feel unwelcome because they are “political paraphernalia.”

School board of trustees president Bill Hutton said that being LGBTQ is a choice and compared LGBTQ people to white supremacists.

“If an LGBTQ+ flag is allowed to be displayed, then any other group would have the same ability,” he said at the time, explaining why the Pride flag was banned. “That could include such flags as supporting white supremacy, which is in direct conflict with LGBTQ+.”

Is the idea of a gay Santa Claus “acceptable” now? Here’s what people said.