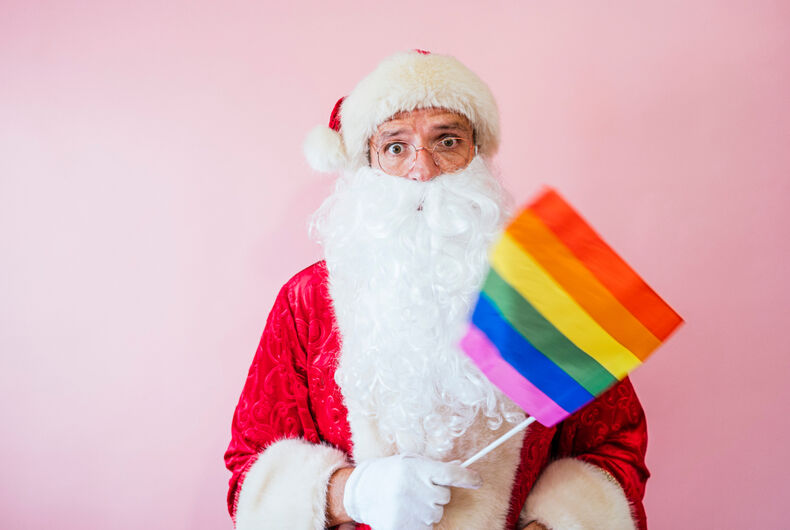 Fewer than half of the respondents in a new poll said that they thought it was “acceptable” for Santa Claus to be depicted as gay.

A YouGov poll asked 1714 adults in the U.K. whether they thought it would be acceptable or unacceptable for Santa to be depicted as being of a certain identity, like Black, Middle Eastern, female, or gay.

Gay and bi people, though, were much more accepting. Fully 76% of queer people in the poll said that it’s acceptable to portray Santa as gay. 50% said Santa can be a woman – almost twice as high as the rate for the general population.

Over 60% of LGB respondents said that it was “acceptable” for Santa to be portrayed as Black, Middle Eastern, South Asian, or East Asian, at least ten percentage points above what the general population said for each of those identities.

The question came up after the Norwegian postal service Posten released an ad with a gay Santa Claus portrayal last month. The ad was controversial, with some people calling it “disturbing” and saying it “sexualized” Santa.

That wasn’t the first time Santa Claus was portrayed as gay. In 2017, Late Show with Stephen Colbert writer Daniel Kibblesmith published a children’s book entitled Santa’s Husband, where Santa was a Black man with a white husband.

In 2013, then-Fox News host Megyn Kelly insisted that Santa Claus and Jesus Christ were both white while discussing an essay by writer Aisha Harris.

“Jesus was a white man, too,” Kelly insisted. “It’s like we have, he’s a historical figure that’s a verifiable fact, as is Santa, I just want kids to know that. How do you revise it in the middle of the legacy in the story and change Santa from white to Black.”

Madison Cawthorn to divorce after 8 months. He just told young conservatives to “get married young.”

Students sued their school for the right to form a Gay-Straight Alliance. They just won.