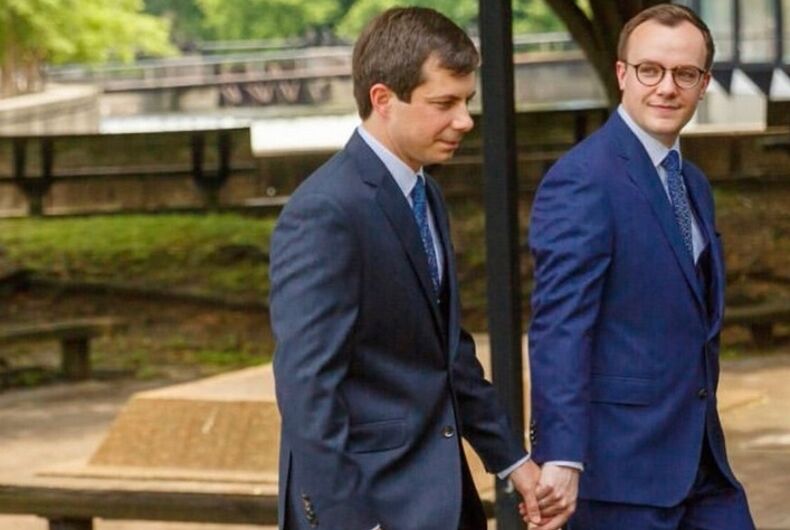 Rob Long at the conservative magazine The National Review wrote a bizarre poem about out Secretary of Transportation Pete Buttigieg and his husband Chasten full of homophobic tropes about the new dads, joking about how same-sex couples becoming parents is a “fad.”

Written from Pete and Chasten’s perspective, the Christmas-themed poem describes Chasten as “Mister Mom” but says that he can’t handle parenting duties because “men are just born that way.”

And why isn’t he a good parent? As a gay man, he’s too superficial. One line says that he “removes spit-up from his shirt by Tom Ford,” another says that he’s giving his newborns “itchy red rashes” by using “fancy soaps.”

“Even when the two dads are gay, they’re still dudes, and most men are just born that way,” the poem reads. “Not trying to sound retro or even a bit anti-trans, but with a diaper to change, your average mans [sic] will put it on backwards or some baffling way, whether he likes Broadway musicals or prefers MMA.”

The idea that gay men lack an inherent ability to care for children that women have is a homophobic and misogynist trope that has long been used to argue against same-sex marriage and adoption by same-sex couples, as well as to saddle women with the bulk of parenting work.

Several stanzas say that the Buttigieges miss having “French wines and artisanal honey” and other luxuries, so they regret having children in the first place. Gay couples are so ill-suited to be parents, according to Long, that the Buttigieges are hoping that the Supreme Court will overturn Obergefell v. Hodges, the 2015 decision that legalized marriage equality in all 50 states.

“We’re thrilled to be dads, gay parenthood is not just one of those fads, but if SCOTUS is looking to overturn Roe, truth to tell, maybe pause that and look at Obergefell?”

Ever since the Buttigieges announced their two children earlier this year, they became some of the most famous gay parents in the country and also targets of rightwing rage.

Fox News host Tucker Carlson said that the Buttigieges were “trying to figure out how to breastfeed.”

“Where are the mothers?” Lila Rose, a prominent anti-abortion activist, tweeted. “My heart goes out to those infants.”

Rightwing pundit Matt Walsh said that the Buttigieges shouldn’t have been allowed to adopt children because “babies need their mothers.”

A GOP candidate in Idaho accused the Buttigieges of “dabbling in human trafficking.”

School suspends teacher for flying a Pride flag. The community is fighting for her.