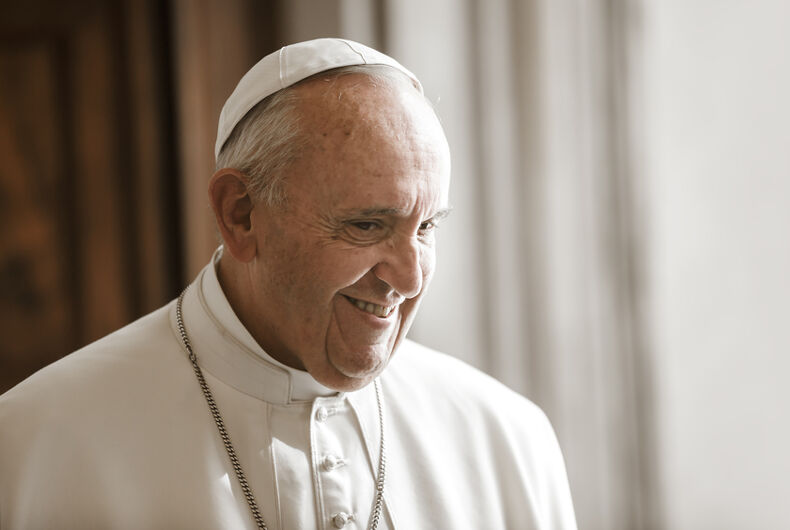 Christmas time is when a lot of Catholics make their periodic visit to church but for LGBTQ Catholics, the welcome mat is seldom out. The US bishops, in particular, have made opposition to LGBTQ rights–and often LGBTQ employees–a hallmark of their muscular dogma.

But the Vatican keeps sending welcoming, if small, signs of encouragement. In the latest instance, Pope Francis sent two letters to New Ways Ministry, an organization that has faced decades-long persecution from the hierarchy for its outreach to LGBTQ Catholics.

Acknowledging the “history has not been an easy one” for the group, Francis thanked the group for its “neighborly work,” in the sense of the commandment to love one’s neighbor. He also called Sister Jeannine Gramick, co-founder of New Ways with Fr. Robert Nugent, “a valiant woman.” (Nugent died in 2014.)

Gramick and Nugent have endured years of attacks from conservatives in the Church, who consider their outreach to LGBTQ Catholics a repudiation of Church doctrine. In 1999, the Vatican banned the pair from ministry to LGBTQ people because of “ambiguities and errors.” That ban was signed by then-Cardinal Joseph Ratzinger, who subsequently became Pope Benedict XVI. Catholic bishops have banned New Ways from speaking at churches

The letters from Pope Francis send a strong signal to American bishops to ease up their attacks on LGBTQ Catholics. The conservative wing had just this month scored a victory against New Ways by forcing the Vatican to remove a New Ways video from a list of resources for the Church’s synod, a two-year period of “listening and reflection” for bishops.

That victory turned out to be short-lived, however. Less than a week after the video was removed, it was restored to the site. Moreover, a Vatican official issued a groveling apology, taking responsibility for the decision.

Thierry Bonaventura, the synod’s communication manager, said he had decided to remove the video for “internal procedural reasons.” (The reasons seem to have been a notification that the U.S. Catholic Conference of Bishops had censured New Ways for supporting marriage equality.)

“This brought pain to the entire LGBTQ community who once again felt left out,” Bonaventura wrote.

In light of Francis’s letters to new Ways, it probably did him no favors with his boss either.

To be sure, Francis is hardly going to deserve a spot as grand marshall in the next pride parade. He continues to uphold Church teaching that homosexuality is intrinsically “disordered” and has spoken out forcefully against marriage equality.

At the same time, though, he is clearly trying to edge the Church away from the virulent homophobia that has characterized it since the papacy of John Paul II. That’s progress, even if it’s too slow and doesn’t address the doctrine that drives the hatred in the first place.

Unfortunately, the Church measures time in millennia, not with a wristwatch, so every step is tiny and achingly late. What the conservatives who hate Francis hope for is that time runs out on his papacy before he sends any more encouraging letters about LGBTQ Catholics.

The sweetest queer love stories of 2021