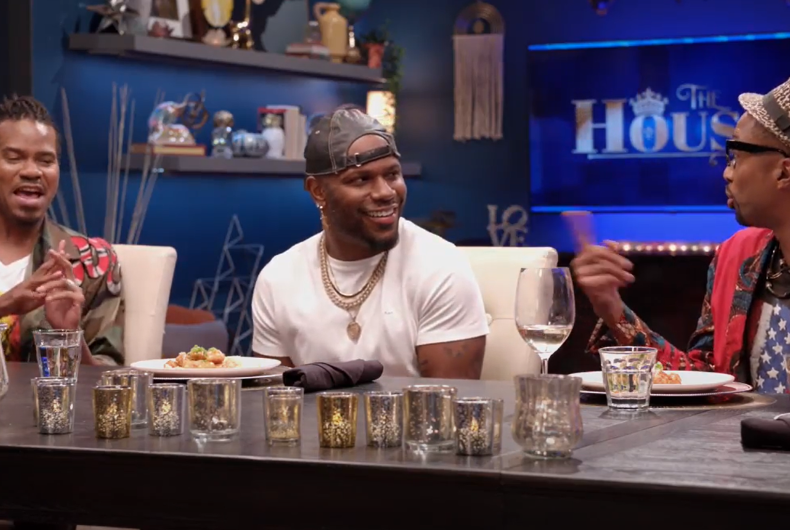 Milan Christopher (center) talked about how self-acceptance helped him share his talents with the worldPhoto: Screenshot

Model and reality television personality Milan Christopher talks on Fox Soul’s The House tonight about how the death of his little brother helped him learn the value of accepting his sexuality as a gay man. The episode airs at midnight Eastern/9 PM Pacific.

In an exclusive clip for LGBTQ Nation, Milan opens up about sticking out – in more ways than one.

Looking at his career today, it’s hard to imagine him trying to fit in with a crowd. Christopher is perhaps best known for his appearance on VH1’s Love & Hip Hop: Hollywood and his work with Beyonce. His 2016 album When I Go addressed bullying and LGBTQ suicide. He has appeared in music videos with stars like Lil Wayne and Kanye West and even did a nude photoshoot for Paper magazine in 2017.

But that all came after he realized that he had to live his life for himself.

“Being from Chicago and growing up, like, in the hood, I had a hard time trying to accept myself,” Christopher told the show’s co-hosts, “walking through the hood, just trying to blend in with everybody.”

“I had a little brother who ended up getting shot, passed away,” he said on The House. “Before he passed away… he asked me why I don’t play the games with him, football and all that other crazy stuff. I was like, ‘I’m gay.'”

“He was like, ‘So? And? What does that mean? You’re still supposed to play me, I’m your little brother.'”

“Literally two weeks after that he passed away, and after that I was like, ‘I don’t give a shit what nobody says, it’s gonna be me.’ So I’ve just been open.”

What does /s mean & why does it matter?

Should 5% of companies’ profits be shared with everyone?