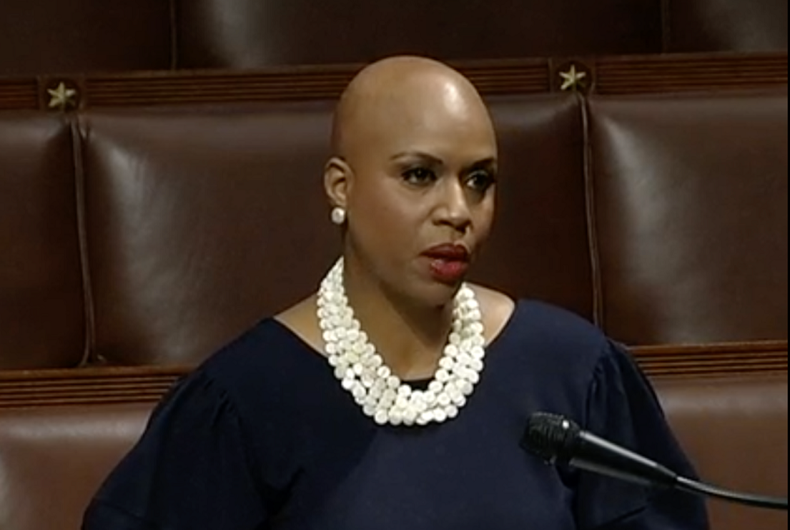 Rep. Ayanna Pressley (D-MA) read the names of the 46 known transgender and gender non-conforming people who were violently killed in the year 2021 in a speech recognizing the Transgender Day of Remembrance (TDOR).

The TDOR was started by a group of transgender people led by Gwendolyn Ann Smith in 1999 to memorialize Rita Hester, a Black transgender woman from Allston, Massachusetts who was murdered the previous year. Pressley noted that Allston is in her congressional district.

Related: Here’s where you can honor trans lives on the Transgender Day of Remembrance this Saturday

“This day was created to memorialize the loss of her life and far too many others due to transphobic violence,” Pressley said on the House floor Wednesday.

“The cruelty of transphobia is a threat that we must confront and root out wherever it exists, whether in music or on television or in the hallowed halls of the nation’s capital,” she said, a pointed comment to some of her colleagues. “There is no place for hatred because someone is brave enough to show up exactly as they are and to live their truth.”

In 2021, she said, “We have been robbed of 46 souls – disproportionately Black and latinx trans women, and these are only the ones that have been properly reported.”

Pressley read a list of 46 transgender and gender non-conforming people killed this year in the U.S.

Pressley said that DeAlto was at that first TDOR memorial in 1999 to memorialize Hester and that she lived in Pressley’s district until her death this year.

DeAlto was an activist who worked with survivors of sexual and domestic violence and advocates for transgender equality. She was helping a young woman when her husband showed up and stabbed both her and DeAlto to death. He later turned himself in to the police.

“Jahaira DeAlto’s compassion will forever be her legacy, alongside her legendary status in the ballroom community for serving everyday realness,” Pressley said.

Pressley did not say 36-year-old transgender woman and health care worker Angel Naira’s name, whose death was reported by HRC this morning.