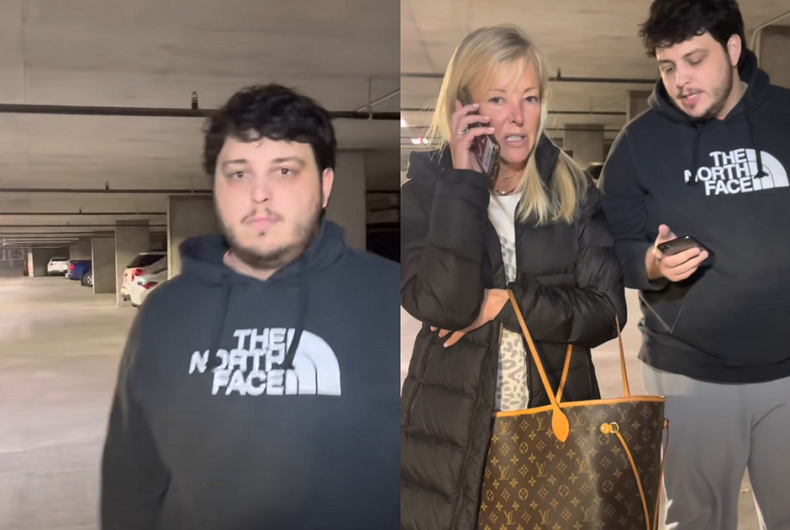 A man in Tennessee has been arrested for allegedly punching a Black parking garage worker because the worker refused to show identification to the man’s mother. The interaction was caught on video.

Edward Brennan and Bitsy Brennan, who are white, were watching Johnny Martinez as he was checking cars for permits in a Nashville apartment complex’s parking garage on the evening of November 27, Martinez recounted. He said he tried to ignore them.

“You don’t belong here,” Bitsy Brennan said as the mother and son duo confronted Martinez. “How did you get here?”

“We just want to know what your job is and why-” Bitsy Brennan can be heard asking in the video.

“None of your business,” Martinez replied. “I don’t need to tell you anything.”

Edward Brennan threatened to call the police and then walked off as Bitsy Brennan continued to berate Martinez for doing his job.

Then Edward Brennan came back and punched Martinez.

“Get that phone out of your-” Edward Brennan said, referring to the phone Martinez was using to record the confrontation. His mother tried to pull him away and shouted “No!”

Then Edward Brennan punched again. “Get the fuck out of my building!”

As Bitsy Brennan pulled her phone out of her Louis Vuitton handbag to call 911, Edward Brennan insisted he didn’t attack Martinez.

According to the arrest warrant, police believe Edward Brennan attacked Martinez in a way that “a reasonable person would regard the contact as extremely offensive or provocative” and caused Martinez to fear “imminent bodily injury.”

“As I was doing my rounds…I noticed people watching me,” Martinez told The Daily Beast. He said that he wears a headlamp, kneepads, and a lanyard for his work that the Brennans would have been able to see. He explained that he works for a booting company that garage managers contract to check for permits.

Martinez said that he waited in the parking garage for police to arrive, but that the Brennans fled before they arrived.

“I felt like crap,” he said, adding that he feels anxious at work now. “I thought I was going to have a typical Karen moment.”

The apartment complex, River House, is not commenting on the matter.