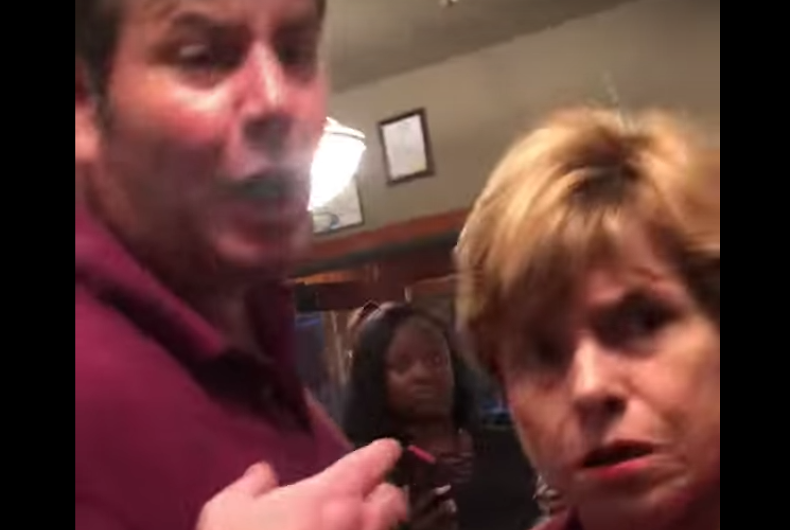 A white Georgia woman and her adult son were caught on video attacking two black, female soldiers after having made racist and homophobic comments about them.

Judy Tucker, 72, and her son Robbie were mad at two U.S. Army Reserve captains, Stephanie Mitchell, 34, and Treasure Sharpe, 27, over an incident in the parking lot of the Cheddar’s restaurant in Macon, Georgia.

Tucker and Robbie followed the reservists into the restaurant and started making comments while they were waiting to be seated. Robbie called them “dumb bitches” and “black lesbian bitches.”

Robbie then went around Mitchell to hold Sharpe’s arm and try to take the phone from her.

According to the police report, Tucker came back with “rage and force” and was “swinging at [Sharpe] striking her in the face.” Tucker told police that she hit one of the reservists, but only because Mitchell was holding her arm to keep her from hitting Sharpe.

Sharpe then told the white family that she’s pregnant, and Robbie retorted, “Oh really, by her?”

Later, police say that Tucker’s daughter Angie tried to take away Sharpe’s phone by “lunging at them multiple times.”

The police report said, “It was never shown through cell phone video that Mrs. Mitchell or Mrs. Sharpe did anything wrong” and that Tucker was “the primary aggressor.”

Video of the altercation went viral, as did video of Tucker crying while getting arrested.

Tucker is being charged with simple battery.

According to witness LaKeycia Ward, the Tuckers got mad at the reservists because the women went around the white family in the parking lot to get into a different spot.

This Gentleman & his mom was hostile about the two soldiers not waiting for them to reverse back into there handicap parking spot for her handicapped husband instead they went around and proceeded to park in there own separate parking spot. . So he then followed them inside the restaurant being verbally abusive calling them black lesbians shouting ” the military lets lesbians serve ? So at that point i start recording & heres the VIDEO.

Cheddar’s put out a statement that read, “We were appalled by the behavior of the individuals who confronted the two female service members. Such behavior flies in the face of our values and those individuals are no longer welcome in our restaurant.”

Sharpe and Mitchell have not commented on the video because they were in uniform.

Is this Clearasil commercial homophobic or all in good fun?