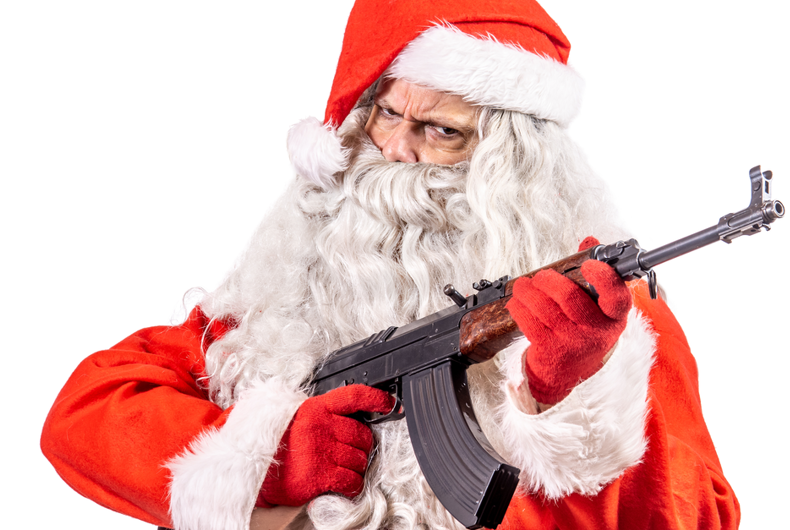 In the photos, Massie is seated on a couch surrounded by six family members with the caption: “Santa, please bring more ammo.” Boebert, who declared she became “born again” as a Christian in 2009, is depicted with her four young sons ranging in age from what appears to be approximately 6 to 15 years of age.

Related: Lauren Boebert is so narcissistic she has a sticker of herself on the back of her phone

Both of these representatives shot and released their holiday photos in the wake of a deadly school shooting at Oxford High School in Michigan that killed four students and injured seven others including one teacher.

This sort of firearms mania, however, has not been limited to two current wingnuts in Congress. Politicians on all sides of the aisle have toted pistols and semiautomatic long rifles in campaign ads.

Politicians, many of who are bought and sold by the firearms industry, are not the only promoters of the deadly culture of guns in the United States. Several privately-owned commercial capitalist enterprises contribute to this toxicity.

On one side of the rifle, shop employees laser-etched the Knights Templar Long Cross of the original Crusaders when they marched to reclaim the Holy Land from Muslims in 1099 CE. On the other side, they engraved Psalm 144:1:

“Blessed be the Lord my Rock, who trains my hands for war, my fingers for battle.”

In another installment in the booming and explosive gun culture, by 2015, Bergeron’s Restaurant in Louisiana, billing itself as the home of “God, Gumbo, and Guns,” offers a 10% discount to any customer who brings a gun with them to lunch or dinner.

Says restaurant owner Kevin Cox, “Show it to me out of your purse, out of your back pocket….Show that you have one so if something goes wrong here today, I know you’re here to protect me.”

“You make a gun-free zone,” he argued, “that’s where bad people with guns are going to go. Dumbest thing I’ve ever heard.”

Since instituting the discount, business has increased approximately 25% alone in 2015.

Giving new meaning to the term “hunting for a wife,” the Jewelry by Harold owner in North Liberty, Iowa gave a husband-to-be a voucher for a new Remington 870 rifle with the purchase of an engagement ring priced at $1,999 or higher.

To apply for this “deal,” one must be eligible to own a gun in Iowa, and not have been convicted of a felony.

In its attempt to pull in shoppers a couple of years ago on Black Friday, the camping and outdoors superstore Cabela’s handed out envelopes to the first 800 people over the age of 18 who lined up in front of its stores before 5:00 a.m. for a chance to win a Browning A-Bolt Medallion .300 WSM rifle with a Cabela’s 50th anniversary gun case worth $875.

And maybe it’s not too late to go down to Nations Truck Sales in Sanford, Florida where a few years ago they offered each customer a brand spanking new assault rifle with the purchase of a truck. Stated General Sales Manager, Nick Ginetta: “We started on Veterans Day. Hey, so many have given so much for this right!”

I’ve heard about people being shot from cannons, but for those who want to remain active hunters well after they have “bought the farm,” now their wishes have come true. Be the first on your block to kill long after you have died. For the sum of only $1250, your loved ones can have you cremated with a pound of your ashes stuffed inside genuine bullets, resurrecting you as live ammunition.

For that measly sum, you can metamorphose as 250 shotshells, 100 rifles cartridges, or 250 pistol cartridges. For only $100 extra, until you come alive again as a killing apparatus, your bullet ashes can rest in peace in a decorative wooden coffin-like box.

The company, Holy Smoke Bullet Urns of Stockton, Alabama, has taken quite literally Shylock’s claim in Shakespeare’s 1596 Merchant of Venice: “The pound of flesh which I demand of him is deerely bought, ‘tis mine, and I will have it.”

According to the company’s cofounder, Clem Parnell, “You know I’ve thought about this for some time and I want to be cremated. Then I want my ashes put into some turkey load shotgun shells and have someone that knows how to turkey hunt use the shotgun shells with my ashes to shoot a turkey. That way I will rest in peace knowing that the last thing that one turkey will see is me, screaming at him at about 900 feet per second.”

And just in time for the holiday season, in 2011, the Scottsdale, Arizona gun club offered its members the service of sending out their Christmas cards with family members, including infants, posing with Santa while holding pistols and military grade automatic weapons, fa la la la la, la la la la. Joy to the world?

I would ask, though, have so many in fact given so much for the right for us to turn our bodies literally into killing devices or for the right to own a “free” assault or hunting rifle?  Do we really want “the last thing that one turkey will see is me, screaming at him at about 900 feet per second?” Do residents of our nation really need so many guns, assault rifles, and others?

Certainly, politicians and commercial ventures like Bergeron’s, Jewelry by Harold, Cabela’s, Holy Smoke Bullet Urns, Nation’s Truck Sales, and gun clubs hold the constitutional right to market their devices of death, but what type of messages are they communicating?

Are we really “free” as a society when our right “to keep and bear arms shall not be infringed”?