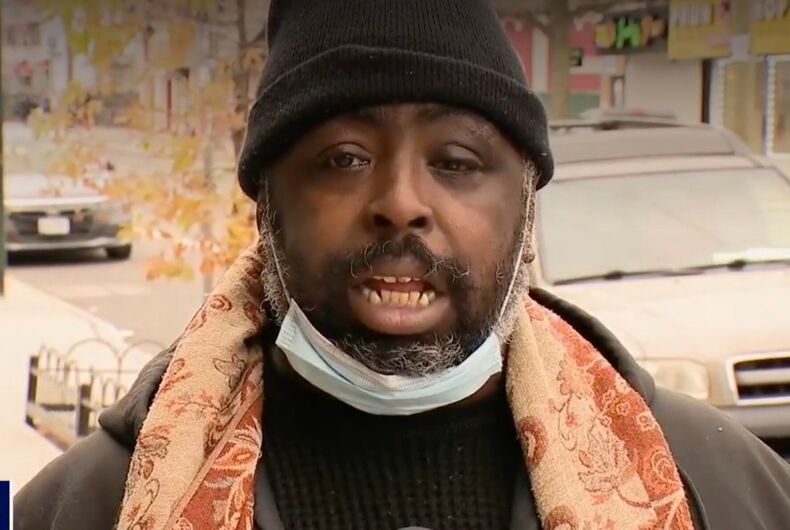 On November 4 around midnight, 37-year-old Jawhar Edwards was feeding the homeless on the Coney Island boardwalk when he was brutally attacked by a man and woman who beat him with a metal pole.

Edwards, a gay man, believes the beating was an anti-gay hate crime.

Related: Black trans woman who is a “beloved community member” is shot to death

“I went down to feed the homeless. In return, I got assaulted, I got gay bashed, I got robbed of my belongings…I got called a faggot, I got told ‘If I see you again, I am going to kill you,’” Edwards said.

The attackers left him with a fractured eye socket that has required multiple surgeries. They also stole his walker and his coat, which had money in its pocket.

“I’m afraid for my life,” he said, adding he still can’t see out of his left eye.

The rally was in part organized by New York Assemblymember Mathylde Frontus. “Many of us of course find this appalling…it’s kind of hard to fathom that this type of violence has escalated,” Frontus told Fox 5.

One 21-year-old homeless man, Infenet Millington, has been arrested for the attack and is being charged with second degree robbery. Edwards believes the man should also be charged with a hate crime, though the NYPD is currently not treating it as such.

Edwards told Gay City News that this is not the first time he has been assaulted due to his sexuality, but he is still holding out hope that the world will change.