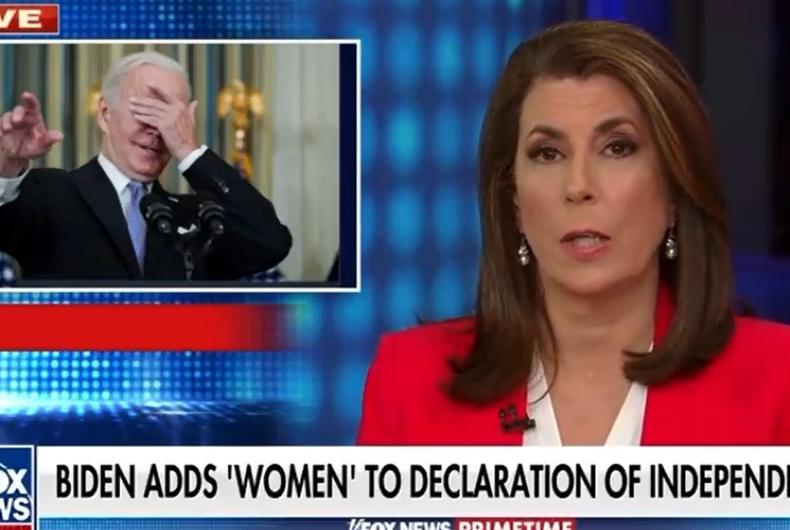 Out lesbian Fox host Tammy Bruce attacked President Joe Biden for saying that women and men are equal while discussing the Declaration of Independence.

“We hold these truths to be self-evident, that all women and men are created equal, that they are endowed by their creator with certain unalienable Rights, that among them are life, liberty, and the pursuit of happiness,” Biden said in a clip Bruce played.

Related: Gingerbread cookies are the latest front in the War on Christmas according to Fox’s token lesbian

“Alright, you noticed how he added ‘women and men are created equal,’ not just ‘men,'” Bruce said sternly. “It matters, right? That’s not what the Founders wrote.”

“Apparently, the sacred words of our Founders weren’t inclusive enough for Sleepy Joe, so he corrected them,” she added sarcastically.

Fox upset that Biden said “all women and men are created equal” pic.twitter.com/P25WTC8FQJ

Biden was delivering the opening speech at the first international Summit for Democracy, a conference for world leaders to address the growing issue of democracy rolling back worldwide.

“Democracy doesn’t happen by accident. And we have to renew it with each generation,” he said during his speech. “In my view, this is the defining challenge of our time.”

Bruce’s attack on Biden for saying that women and men were created equal might come as a surprise considering her distant past. In the 1990s, she was the president of the Los Angeles chapter of the National Organization for Women (NOW). According to the LA Times, she was a “true believer who spent the first half of the 90s raising hell locally and nationally,” organizing marches and standing up to local politicians as she developed a career in the media.

Her first major conflict with other liberals started in 1995, when she helped lead protests of O.J. Simpson after he was acquitted of charges connected to the murder of his ex-wife Nicole Brown. The LA chapter of NOW eventually censured her and removed her from her leadership position after she faced criticism from Black feminists for making statements they said were racist while ignoring the racism involved in the Simpson case.

“Race issues are not at the very top of my list,” Bruce said in a later interview about the conflict with NOW, admitting that she didn’t think NOW should be “worrying about Black men.”

“What I worry about are women. That’s what makes me a feminist.”

Later in that decade, Bruce defended the hatefully anti-gay Dr. Laura Schlessinger and published a book entitled The New Thought Police, rebranding herself as a staunch critic of the left.

In 2003, she worked for the Republican Party and was appearing on Fox News and on Laura Ingraham’s far-right radio show. Completely free from any career-related need for approval from the left or anti-racist organizations, she attacked President Barack Obama and his family when he was inaugurated in 2009, saying, “We’ve got trash in the White House.”

Bruce can’t even use the excuse that she’s focused on women’s rights anymore. In 2018, she attacked a small Scottish bakery that was selling “gingerbread people.”

“In this case it’s calling gingerbread men a gingerbread person, when obviously… they’re men,” she said about the baked goods.

Earlier this year, Bruce said on Fox News that she got vaccinated against COVID-19 but feels that “if I could give it back,” she would.

She also warned Fox viewers about mutant animals that she claimed were “obviously from Hell.”

Lauren Jauregui claims Perez Hilton outed her. He says he’s “not sorry” because he didn’t do it.